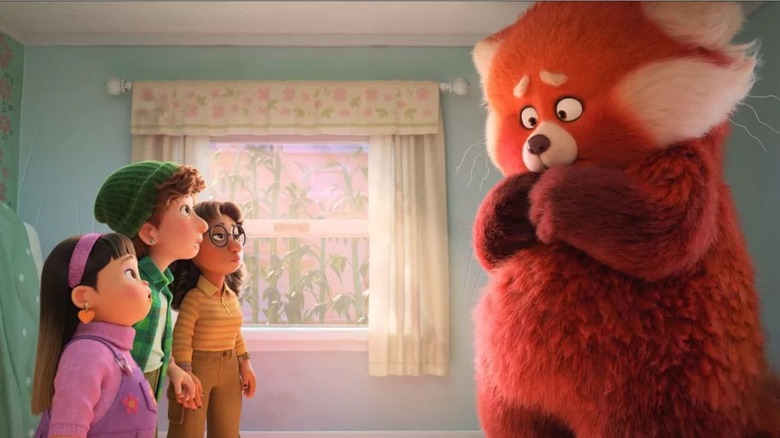 Since the debut of "Toy Story" in 1995, Pixar has put out 24 films, with toys, bugs, cars, fish, monsters, superheroes, rat chefs, post-apocalyptic trash robots, dinosaurs, elves, emotions, and men of all ages at the forefront. There's an old adage that girls will watch so-called "boy's content," with male leads and action-packed adventures, but boys won't watch "girls' shows," starring girl protagonists and "girly" storylines. It's a statement we've heard over and over again, and a mindset enforced whenever trolls review-bomb a woman-led superhero movie or harass an actress off social media for the crime of being cast in a "Star Wars" movie. With the exception of "Brave," which focuses on a princess who is already quite sure of herself, and "Inside Out," which mostly follows the anthropomorphic emotions inside of a girl's head, Pixar has never told a genuine coming-of-age story where the protagonist has been a girl, until now.

Domee Shi made waves in 2018 when she became the first woman to direct a short for Pixar, the Academy Award-winning "Bao" about an aging Chinese-Canadian woman dealing with empty nest syndrome who gets a second chance at motherhood when she makes a steamed bun that comes to life. Now, Shi makes her feature debut with "Turning Red," a coming-of-age story in the early 2000s about a young Chinese-Canadian girl named Mei Lee who discovers that in addition to the trials and tribulations of growing up, she also spontaneously turns into a giant red panda whenever her emotions become too overwhelming.

Mei Lee Is All Of Us, Regardless Of Gender Identity 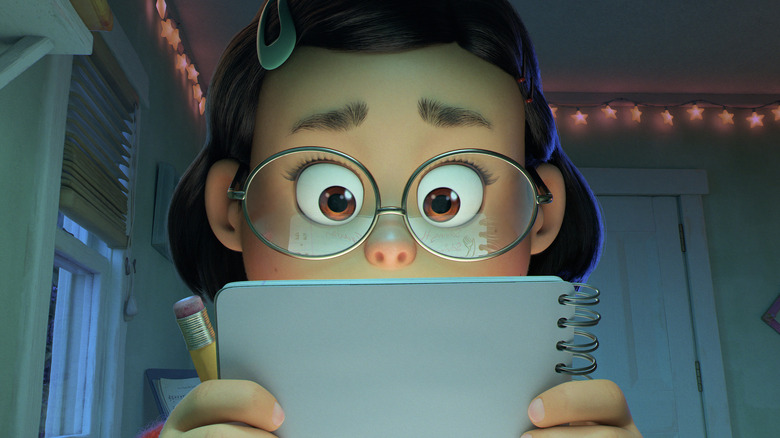 Last month, Pixar invited /Film to attend a virtual presentation, which allowed us a look at the first chunk of the movie, right about the time Mei discovers that she sometimes takes on the form of a red panda half the size of her entire bathroom. The moment the screen faded away and my preview link informed me there was no more, I audibly yelled, "But wait, I need to know what happens next!"

Almost immediately, "Turning Red" transports us back to the early 2000s, complete with Tamagotchi keychains, dreamy boy bands, Lisa Frank-looking stickers, and the iconic fashion statement of wearing colored leggings under a skirt. "Turning Red" effortlessly feels authentically aughts without winking at the camera about it being a period piece, feeling an the animated counterpart to "Pen15."

While Mei Lee (Rosalie Chiang) is unapologetically a "teen girl," she's also immediately relatable regardless of gender identity. She marches through the streets of her city with the head held high confidence of Ferris Bueller, she swoons over the band 4*Town like when Wayne sees Cassandra in "Wayne's World," and does so without ever feeling like she's sacrificed her femininity to appeal to male viewers incapable of identifying with a female character. More importantly, she's a teenager who acts like a teenager. She doesn't come with some otherworldly maturity nor is she the coolest kid in school, she's just a kid trying to do well in school, have a great time with her friends, gush about her passions, enjoy life, and be present enough in her family to keep her parents off her back.

Hell Is A Teenage Girl 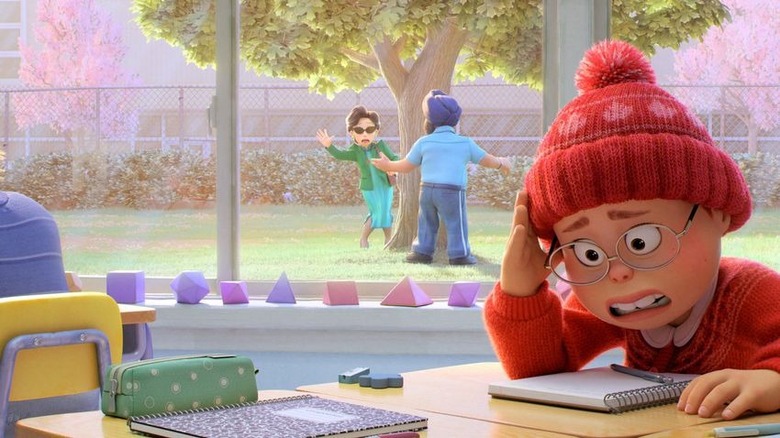 It's not that parents don't exist in Pixar movies ("Finding Nemo" is literally about a parent's journey and "Onward" is about the quest to revive a parent) but Pixar has yet to really dive into the relationship dynamic between mother and daughter, and "Turning Red" isn't afraid to admit that sometimes parents just don't understand their children, and children sometimes struggle to remember that their parents are still human. Mei Lee's mother Ming (Sandra Oh) is extremely protective, bordering on overbearing ... okay, yes, she's absolutely overbearing, but her intentions are clearly rooted in love. After Mei learns of her transformation, she goes to school only to find out that her mother has followed her, and the animation feels like Mei is in a horror movie.

To quote the incomparable opening of "Jennifer's Body," "Hell is a teenage girl." "Turning Red" knows this to be true, and playfully exploits this horror of parental embarrassment, unexplainable body changes, and emotions that feel uncontrollable. It'd be easy to call "Turning Red" the Pixar version of "Ginger Snaps," which presents a werewolf transformation as a metaphor for puberty, but "Turning Red" is a bit more deeply rooted in the psychological and emotional changes that come with puberty, not just the biological "curse" of bleeding once a month for 40 years.

RED PANDA MEI IS SO CUTE I WANT TO DIE 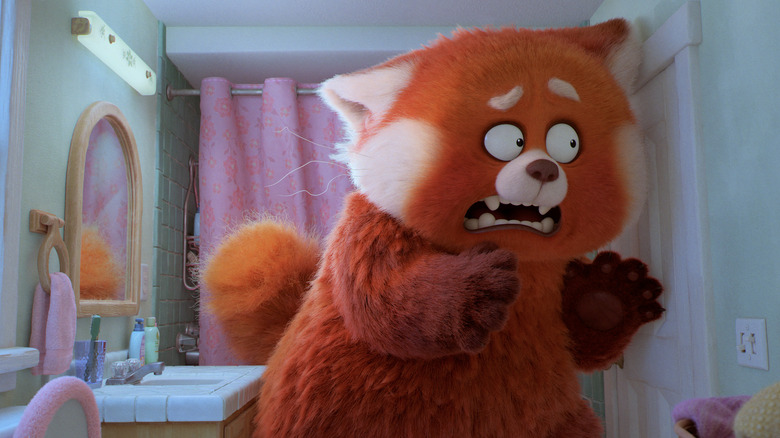 I'm so sorry, Mei, I know that turning into a gigantic, hairy beast is probably not how you want to live your life, but Red Panda Mei is unbelievably cute. The Pixar team took so much care into crafting the character design, even including the detail that Mei throws her hands up when she's startled, which is an actual defense mechanism for red pandas in the wild, trying to make themselves look as big as possible. As I learned during the virtual press presentation, Shi was adamant that the Pixar animation team incorporate anime influences into the art style. The characters express themselves in exaggerated ways frequently seen in anime, like stars appearing when amazed, oversized droplets of tears when sad, pupils that shrink down to a dot during panic, and Red Panda Mei's exaggerated curvature in the maw when screaming and crying.

The team utilized a variety of animation techniques totally new to Pixar, including the brand new profile movers technology, and stationary animation, something that Pixar is notorious for not doing. Supervising animator Aaron Hartline noted that in his entire career, never has a director asked for this particular style of animation, where movement comes from a single point, a style shown frequently in anime for comedic effect. After Mei transforms into her panda form, she tries to hide in the bathroom but runs into a classmate. Without budging the rest of her frame, she jolts out an arm over the girl's face and pushes her entire body in one fluid motion back into the stall. It's a hilarious moment, and one that looks unlike any of the physical comedy seen in a Pixar movie ever before.

The Blessing And Curse Of Disney+ 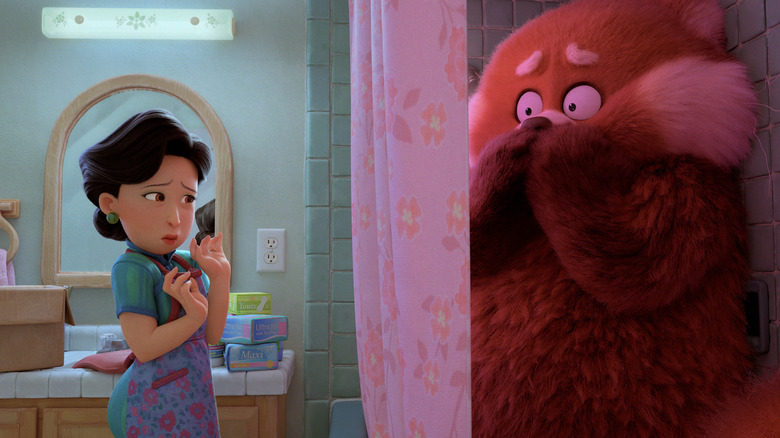 Everything about "Turning Red" feels *in extreme Backstreet Boys' voice* larger than life, and the unique animation more than deserves to be seen on the biggest screen possible. Unfortunately, due to the continuing pandemic, "Turning Red" will follow "Soul" and "Luca," heading straight to Disney+. As sad as it is that Mei Lee will not have her day on the big screen, this pivot may be a blessing in disguise. "Encanto" performed well in theaters, but exploded into a cultural phenomenon only after it was made available and accessible through Disney+. "Turning Red" feels like one of those Pixar films that should be seen by everyone of every age, and if Disney+ is the way to get those eyes on Domee Shi's work, then so be it.

From what I've seen so far, "Turning Red" looks like the film I needed when I was 13 years old, and would have made me feel a lot more normal on the days when I too felt like a giant red panda running through the streets and crying because I didn't know how to control my emotions and refusing to talk to my mother who was only trying to help. I never want to speak for anyone other than myself, but I think a lot of people could also use some healing of their inner 13-year-old self as well, and "Turning Red" looks like just what our therapist ordered.

Read this next: The 14 Best Animated Movies (That Aren't Made By Disney Or Pixar)