I will tell basically anyone who will listen that I’m extremely lucky to have creative kids who love crafting just as much as I do. The crafts that usually go over the best in my house, however, are the kind that they can have fun making while they’re in the crafting process and have fun playing with afterwards too! That’s why I’m always trying to come up with cute ways to help them make dolls, puppets, toys, dress up pieces, and anything else that they might have fun with once they’re done the finished product. I was cleaning out our crafting drawers lately and came cross some brightly coloured napkins I’d forgotten about and an old package of pipe cleaners, and I was struck with a simple idea for making easy but super cute and posable dancing napkin puppets! 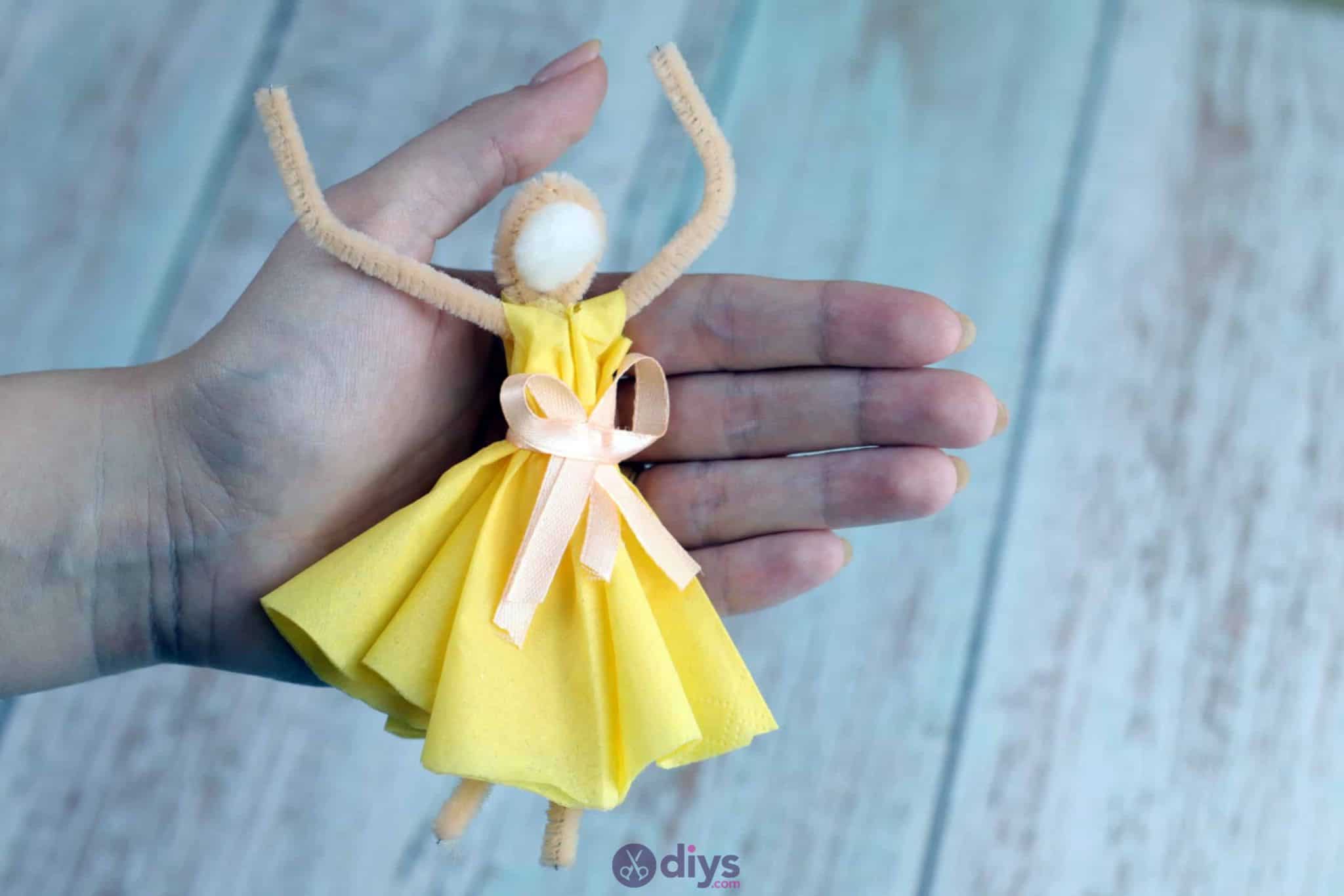 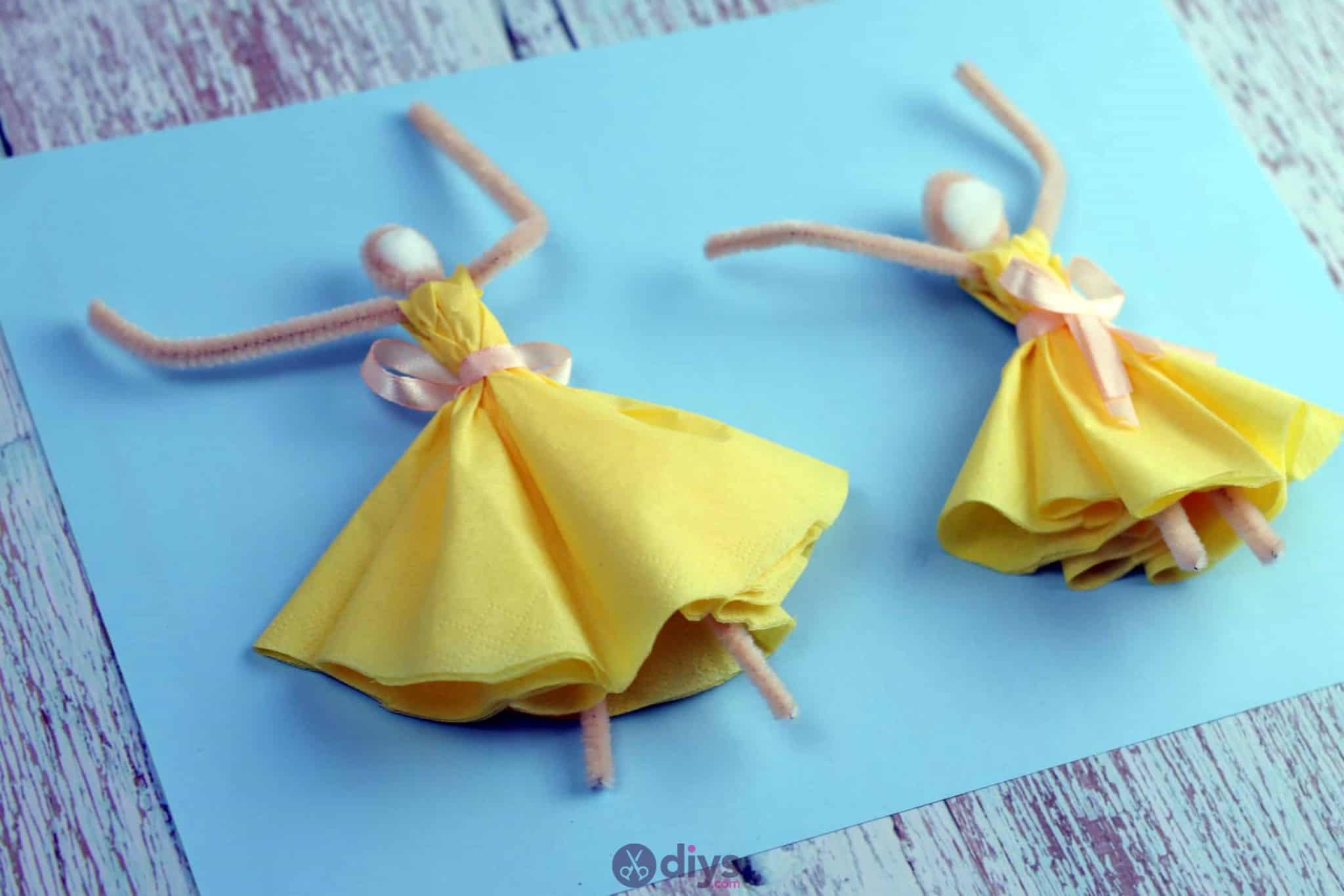 Luckily, the puppets were such a hit that we ended up making several of them together, so I had plenty of opportunity to document our crafting process, just in case other DIY enthusiasts like the idea and want to try it out as well! Check out these step by step instructions complete with photos! If you’d rather follow along with a video tutorial instead of written words, scroll to the bottom of this post to find just what you’re looking for. 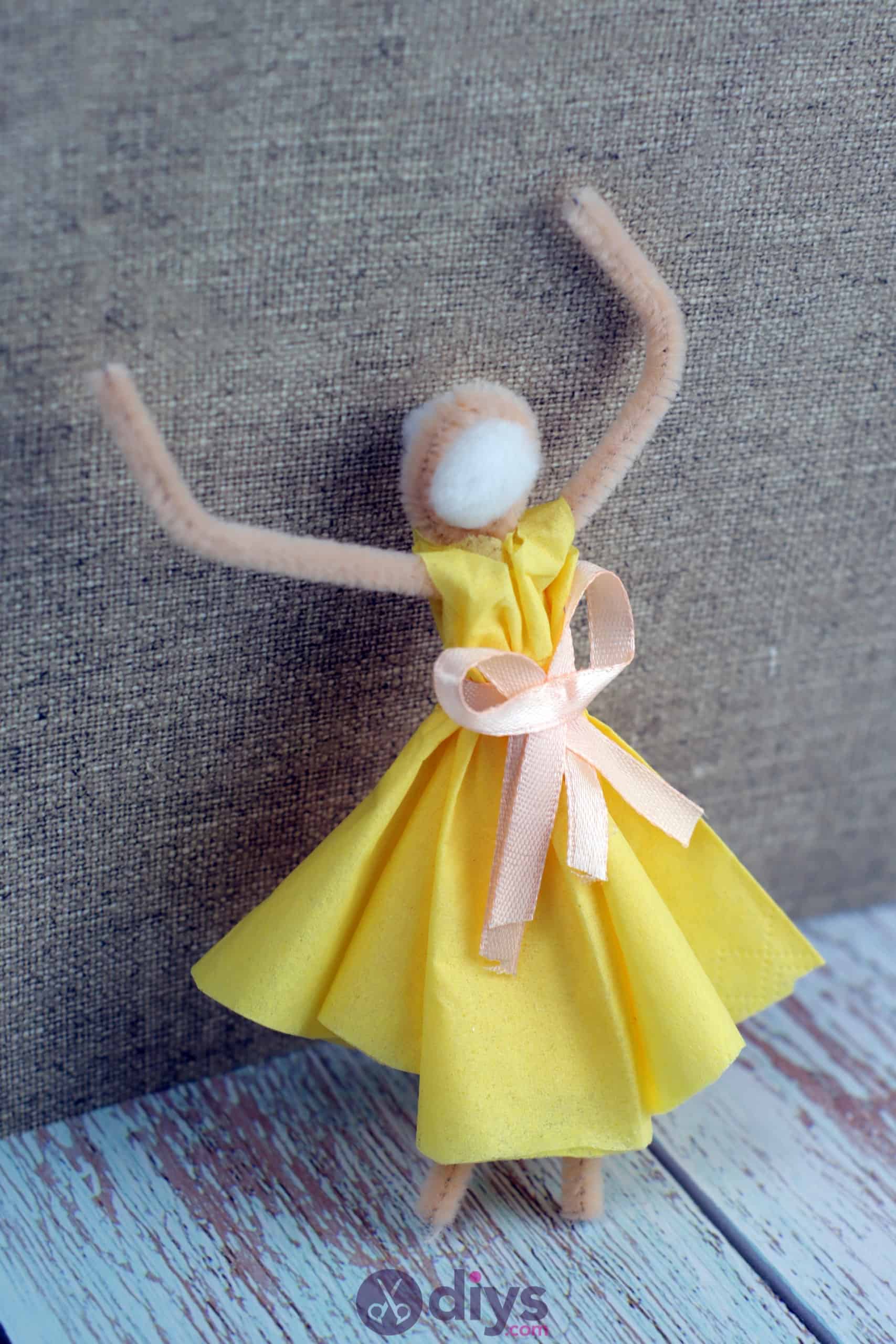 For this project, you’ll need: 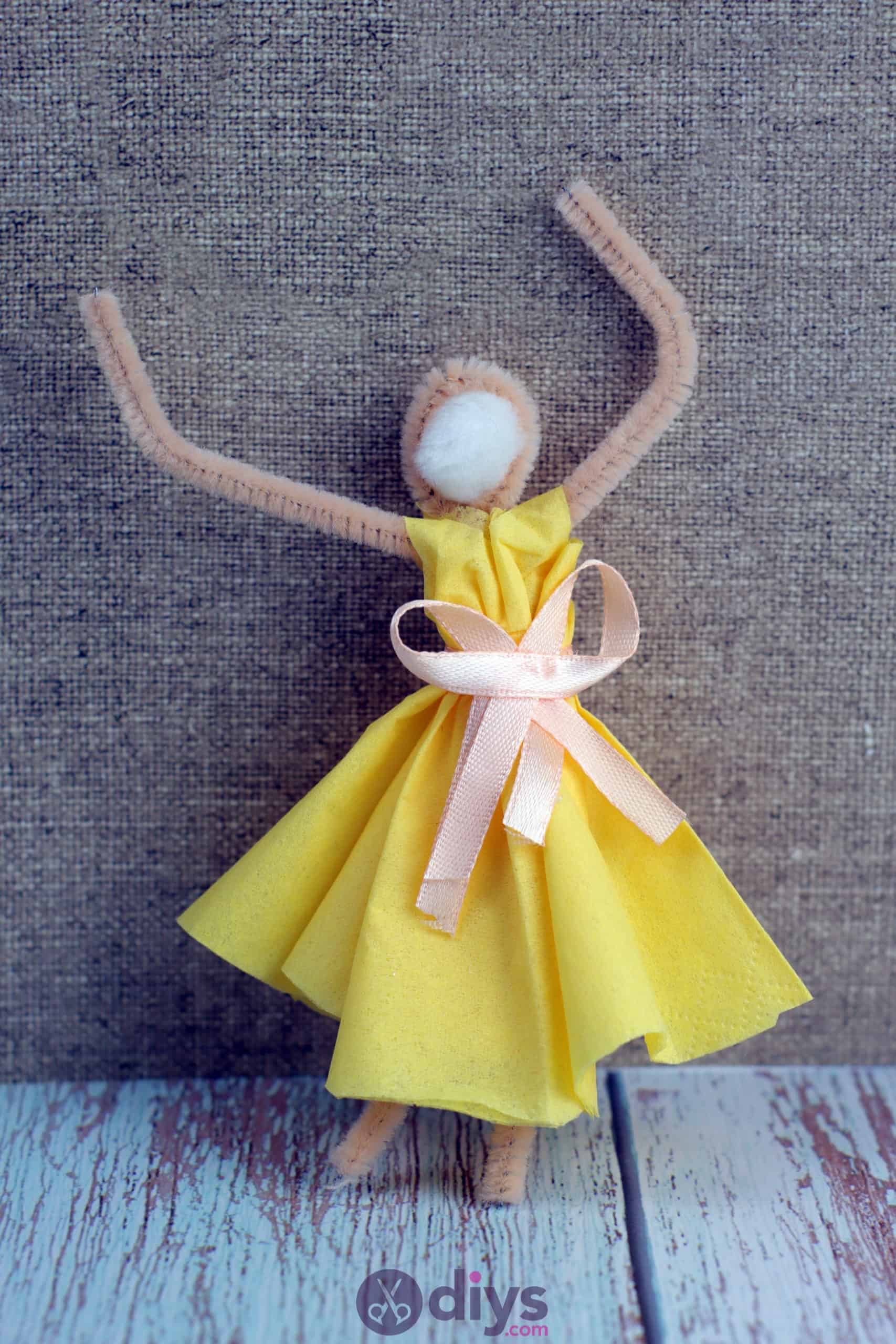 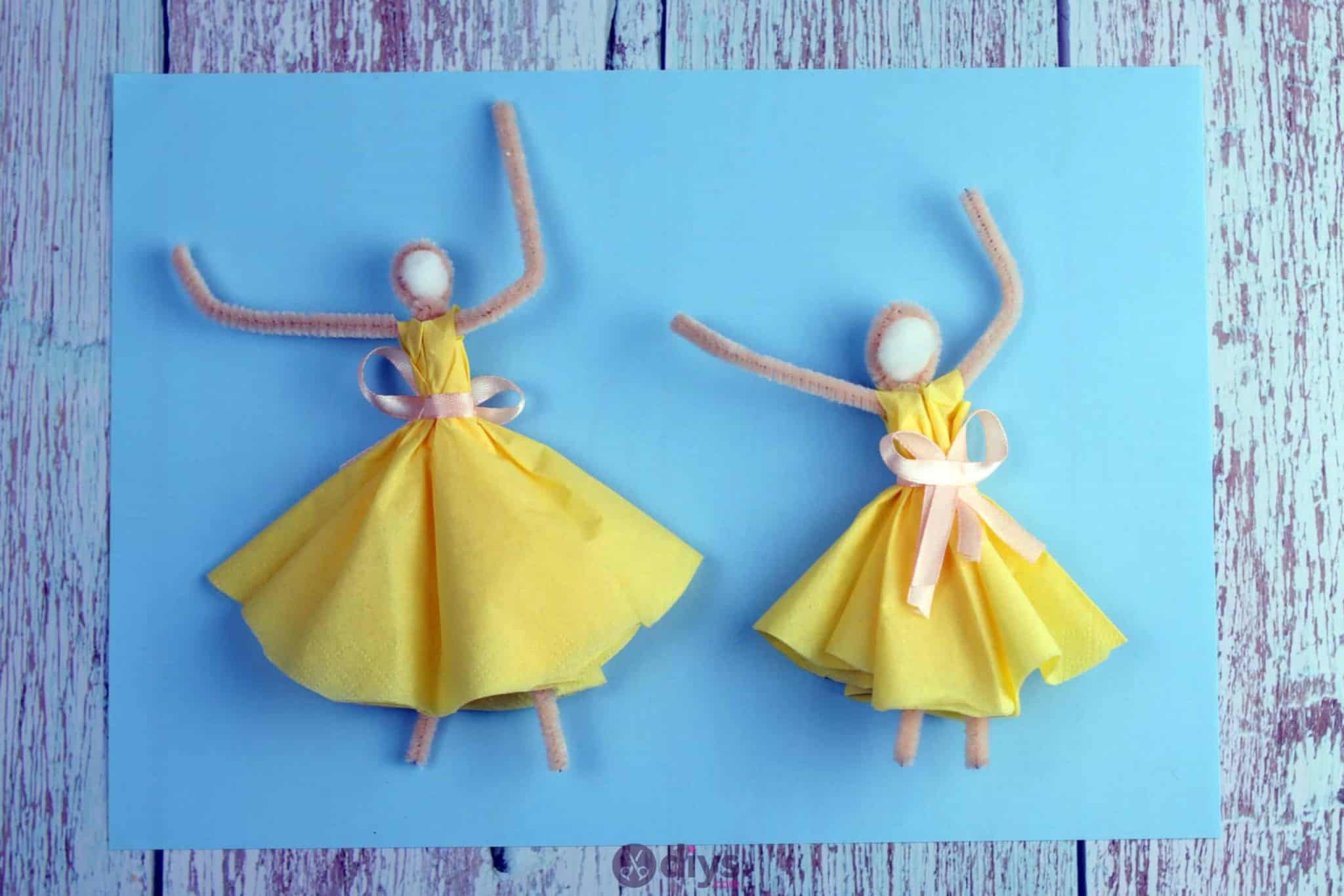 Use your pink ribbon to make a bow! Curl one end inwards to make a small loop until it crosses back over itself with a little bit of excess like a ribbon’s end. Apply glue where the end of the ribbon crosses over the rest of itself and stick it into place. Loop the other side inwards too to make a second loop and cross the ribbon over in the same spot as the first end, sticking it down in the middle as well. Trim the ends to the same length; I cut mine on an angle so the ribbon wouldn’t fray. You now have a bow! Set it aside for the moment. 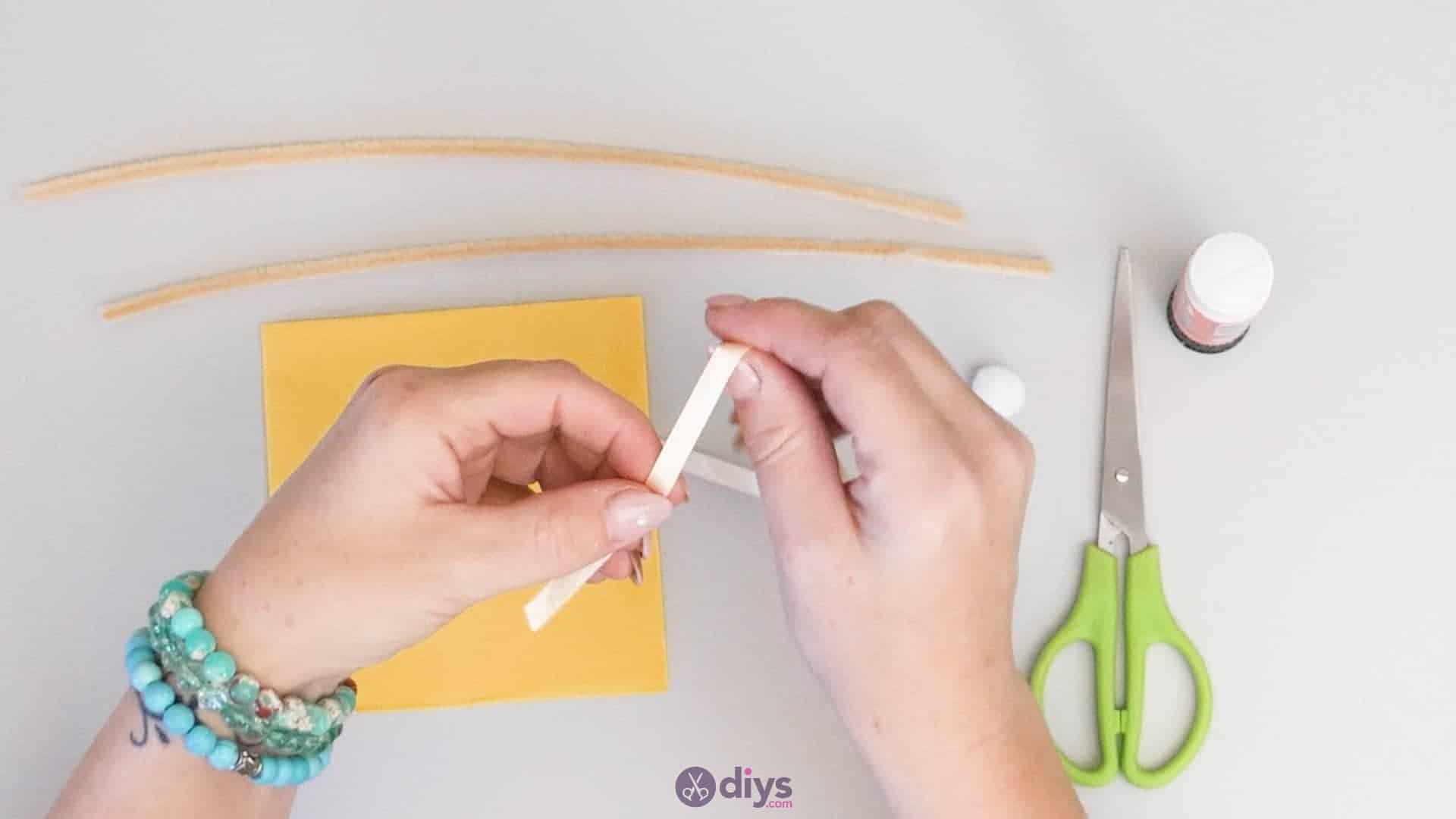 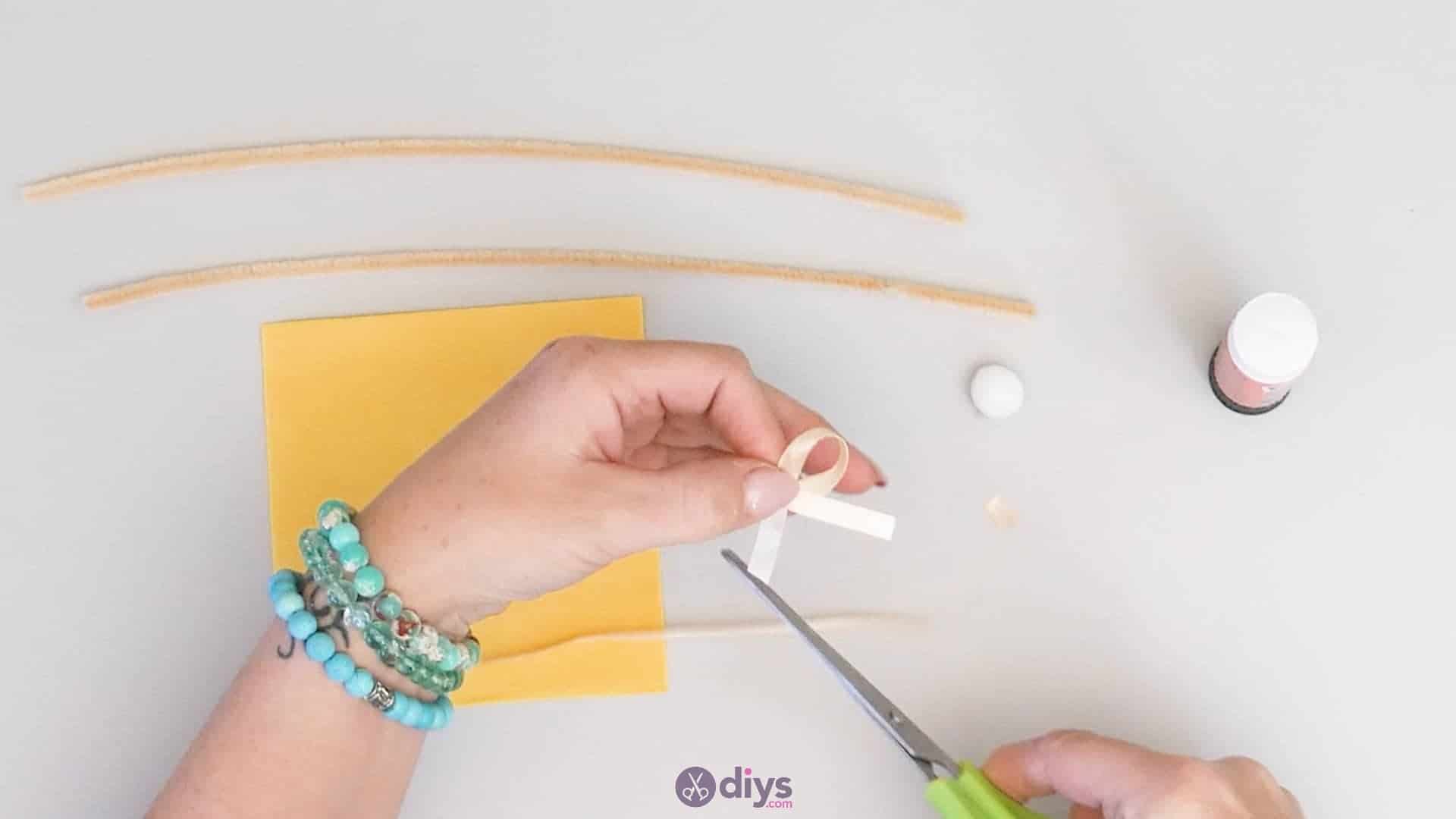 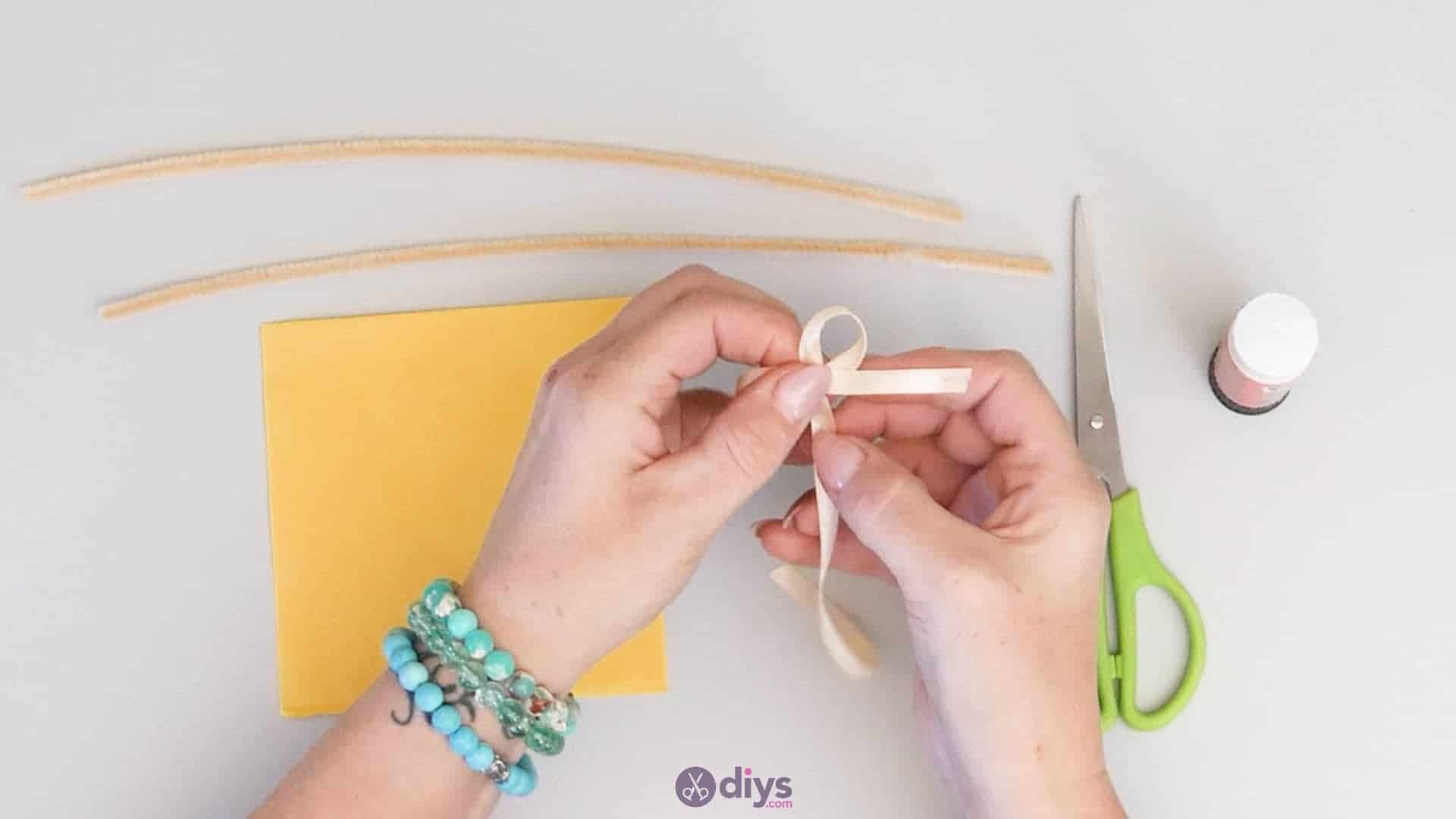 Use your pipe cleaners and crafting pom pom to make your puppet’s head and body! Take your first piece and fold it in half so the ends are even with each other and at the bottom and the halfway point makes a curve at the top. Pinch the curve closer together and slide your crafting pom pom (I used a white one but you can use whatever colour you like) into the arc shape there. Pinch the pipe cleaner right under the pom pom together so the pom pom is wrapped in the fuzzy wire and twist the two long ends around each other several times underneath the soft sphere to hold it in place. Your puppet not has a head and a body! Straighten out the ends so they point downwards again, giving your puppet a torso and legs. Take your second pipe cleaner and place the base of the pom pom head where you just twisted the first pipe cleaner right at the second one’s halfway point in the middle so the two are perpendicular. Bring the ends forward and twist them around the first pipe cleaner to attach the two and make the puppet’s arms! 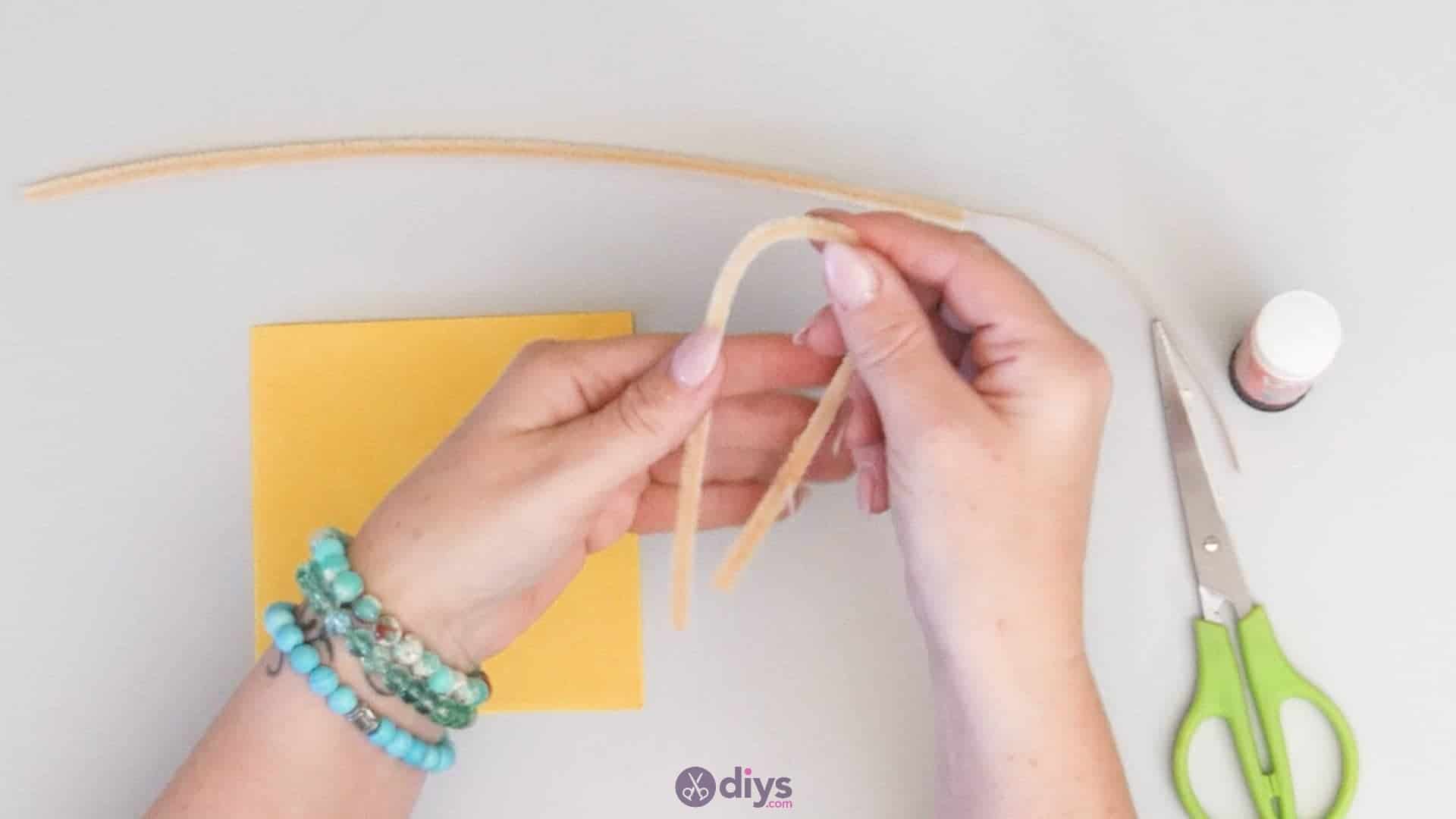 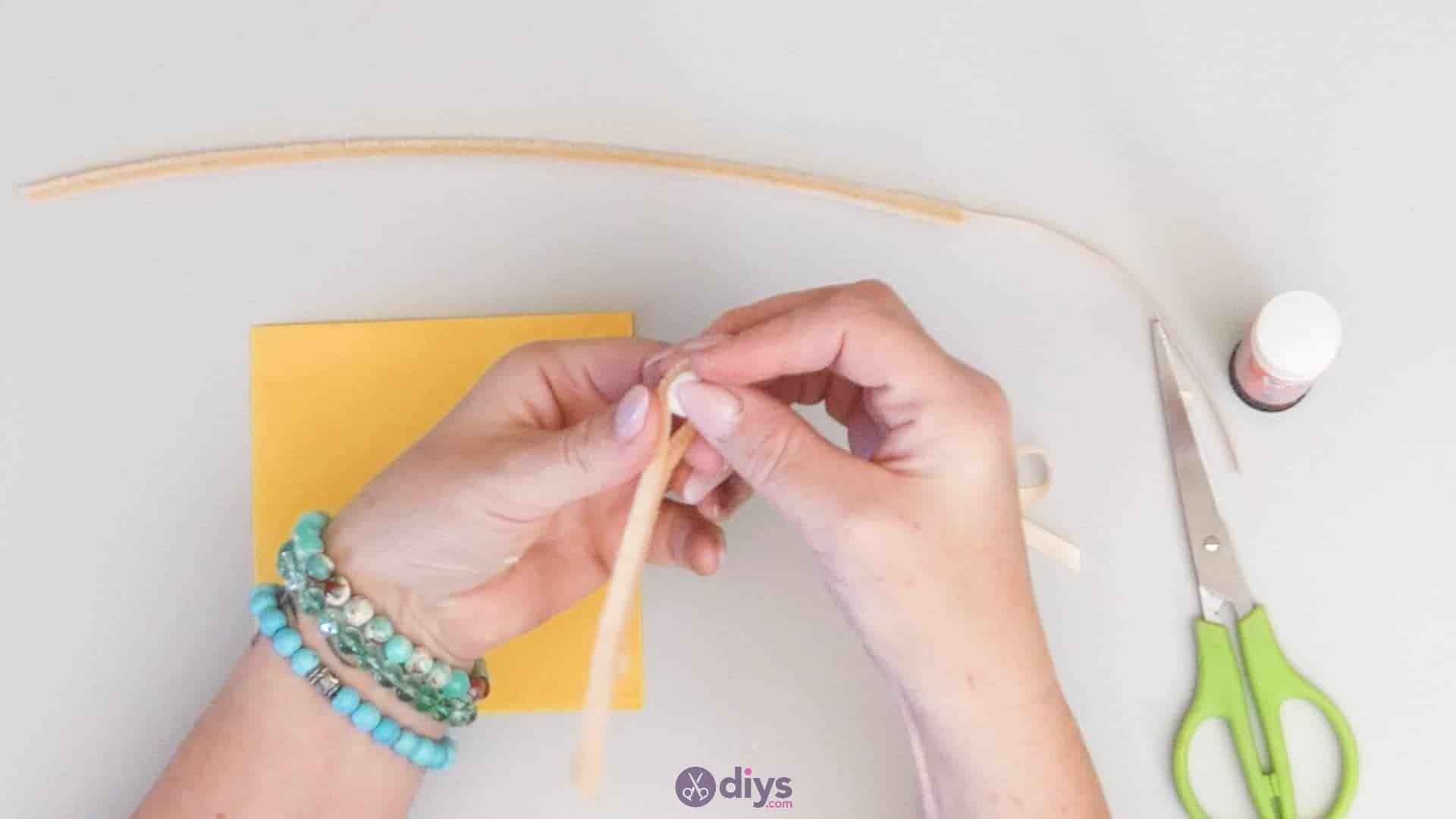 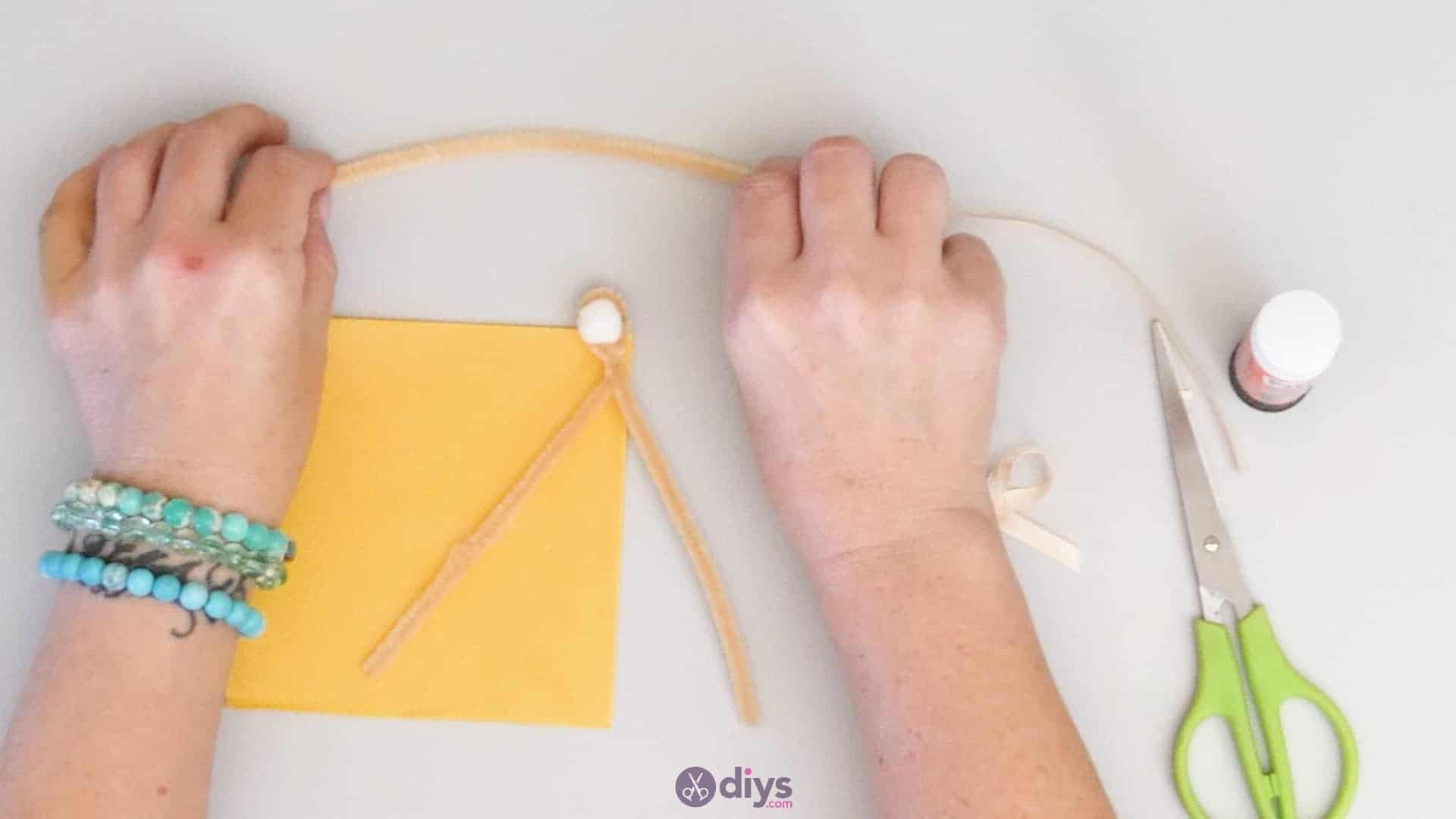 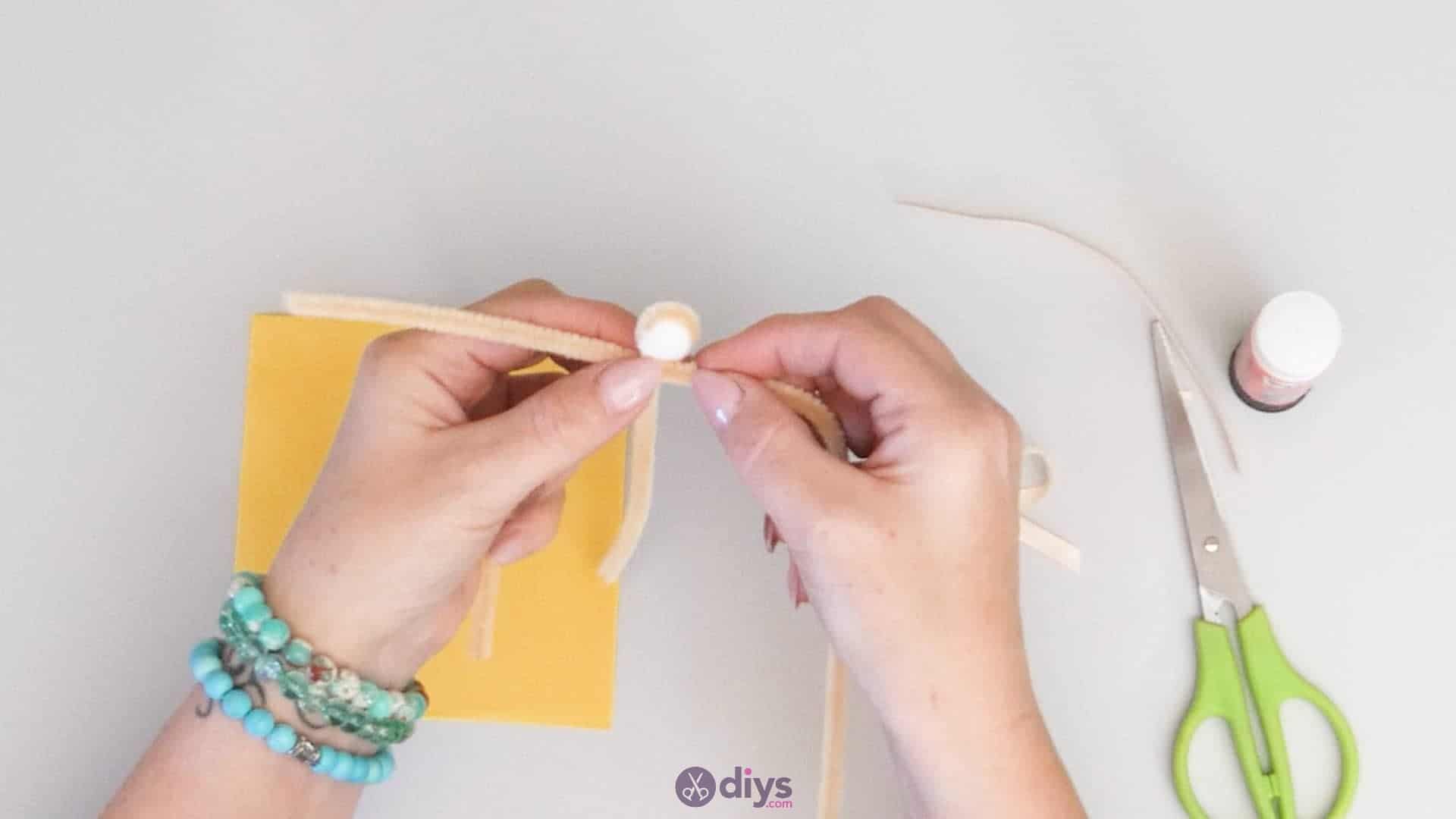 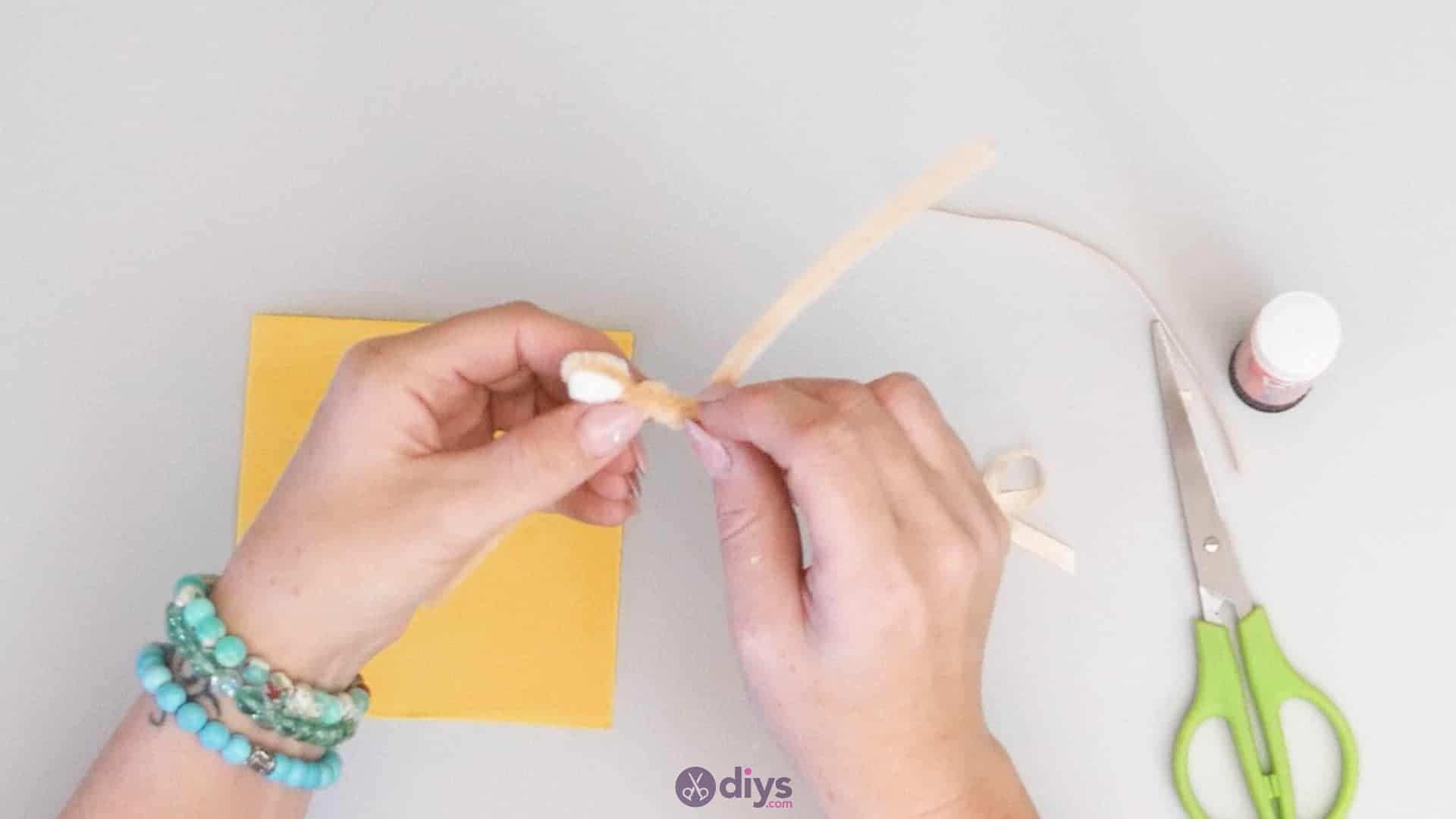 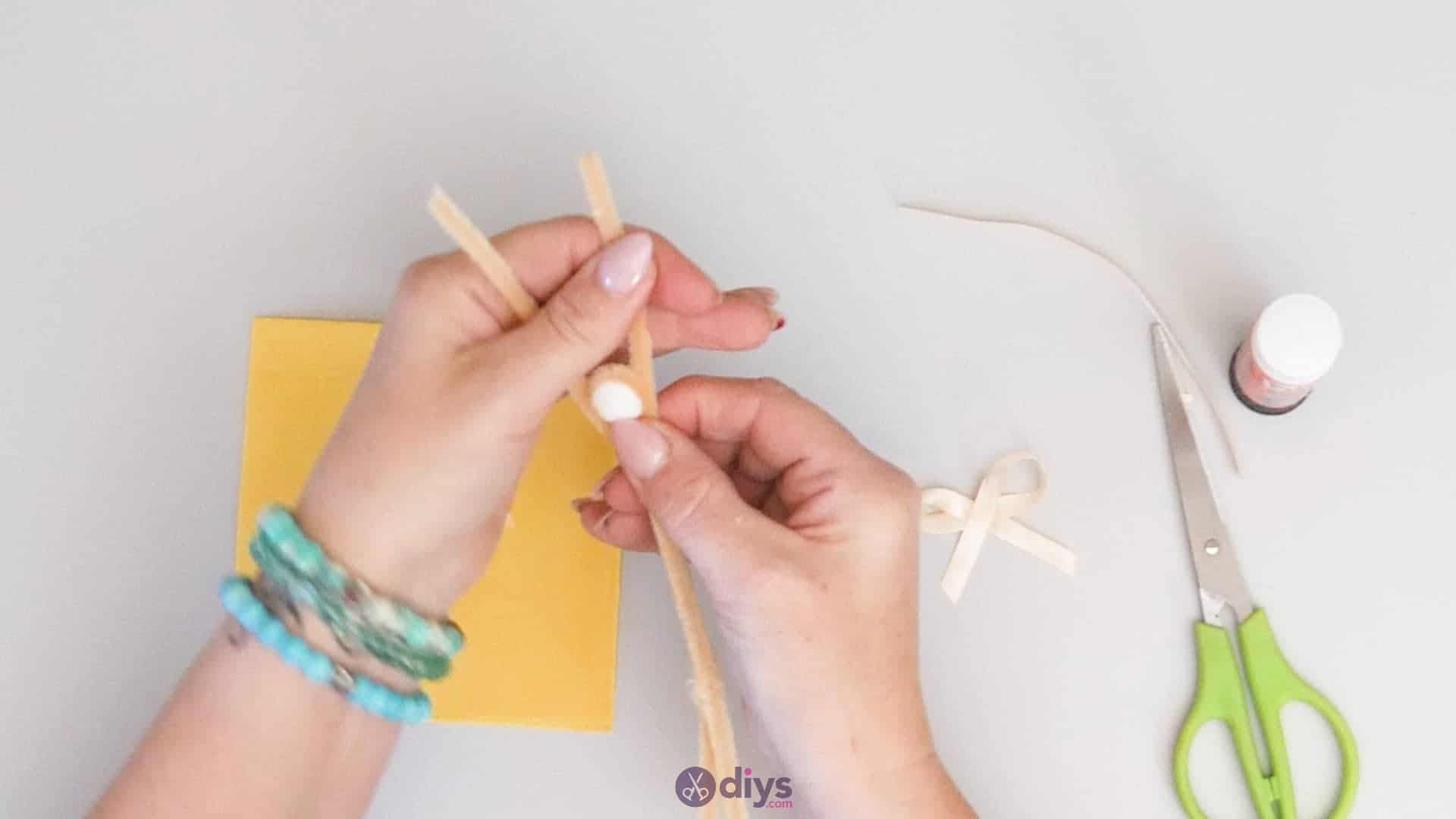 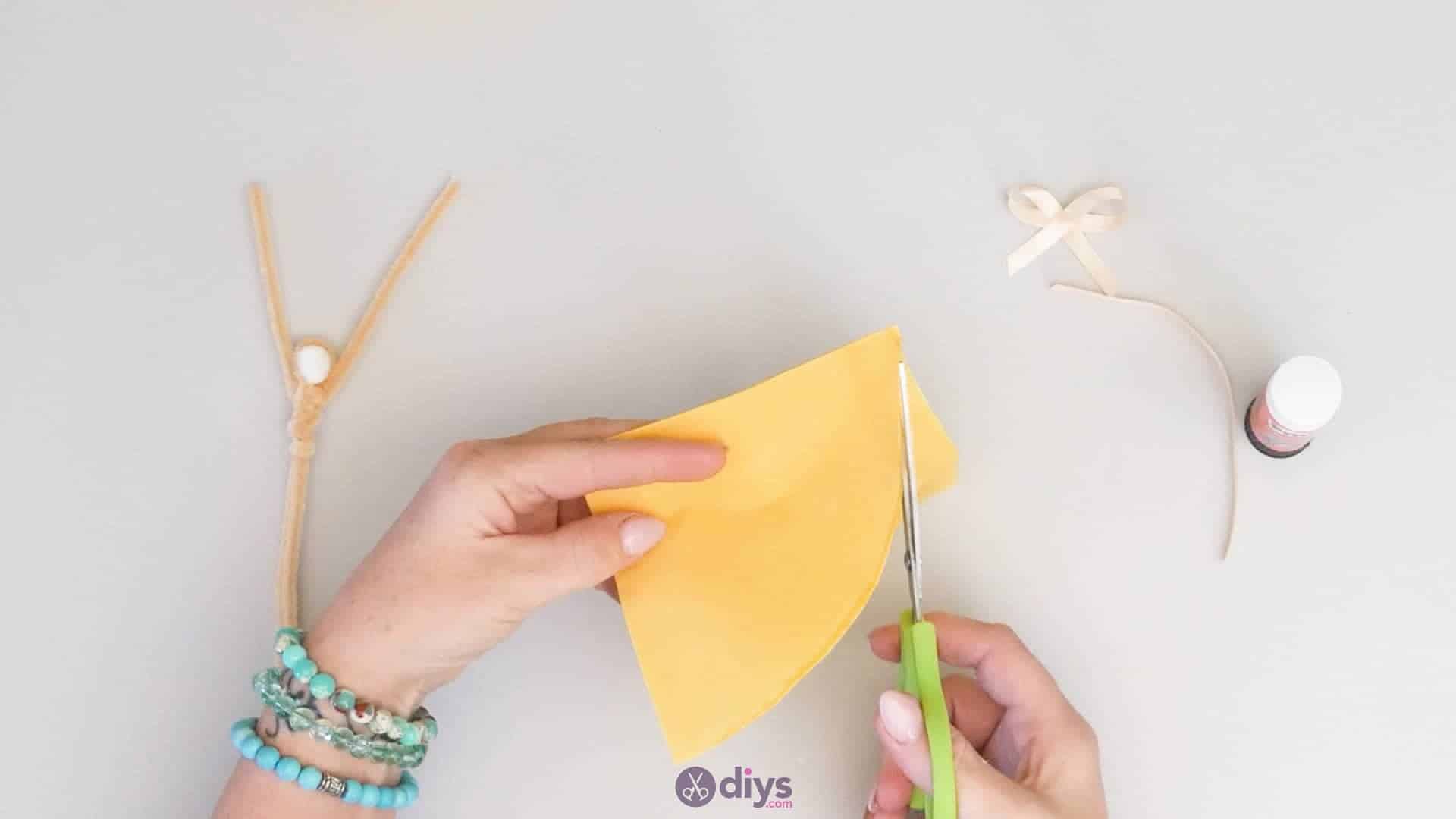 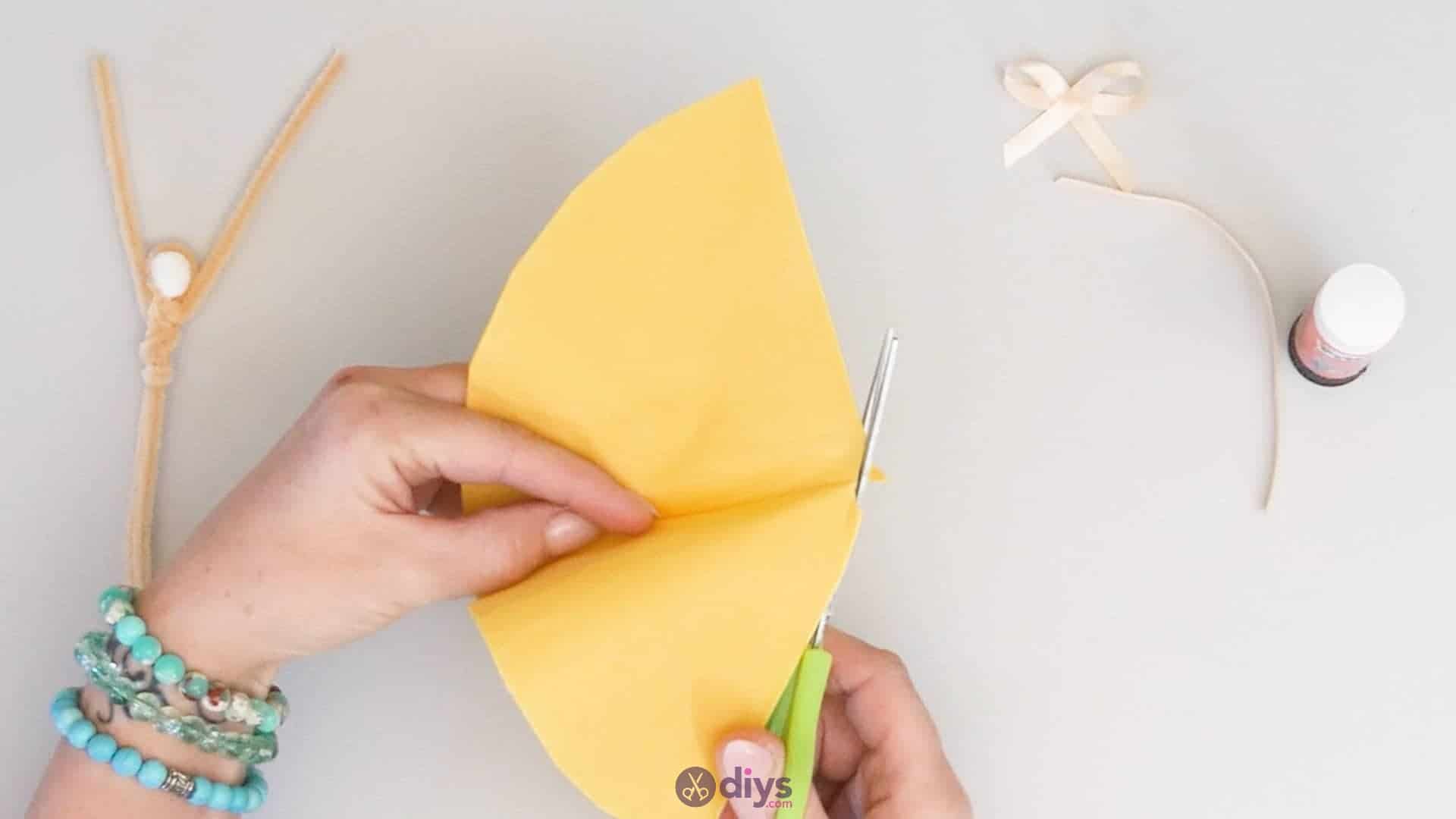 If your napkin isn’t already square shaped like mine, cut one end of your rectangle off until you do have a square. Then turn the napkin so you have a diamond shape rather than a square, with points at the top, bottom, and each side rather than corners. Place your scissors at the bottom point and cut in a gently rounded arching shape from that spot all the way up to the top point, in a sort of soft semi-circle. You’ll still have one point on the left side. Now open the napkin out and see how the rounded cut becomes an actual semi-circle and the pointed bit you held onto before becomes a straight edge. In the centre of this straight edge, cut a very small semi-circular hole, only about half an inch wide. On either side of that, a few centimetres away from the ends of the hole you just cut, make one small, straight cut downwards on each side. You’ve just made your puppet’s dress, complete with a neck hole and sleeves. 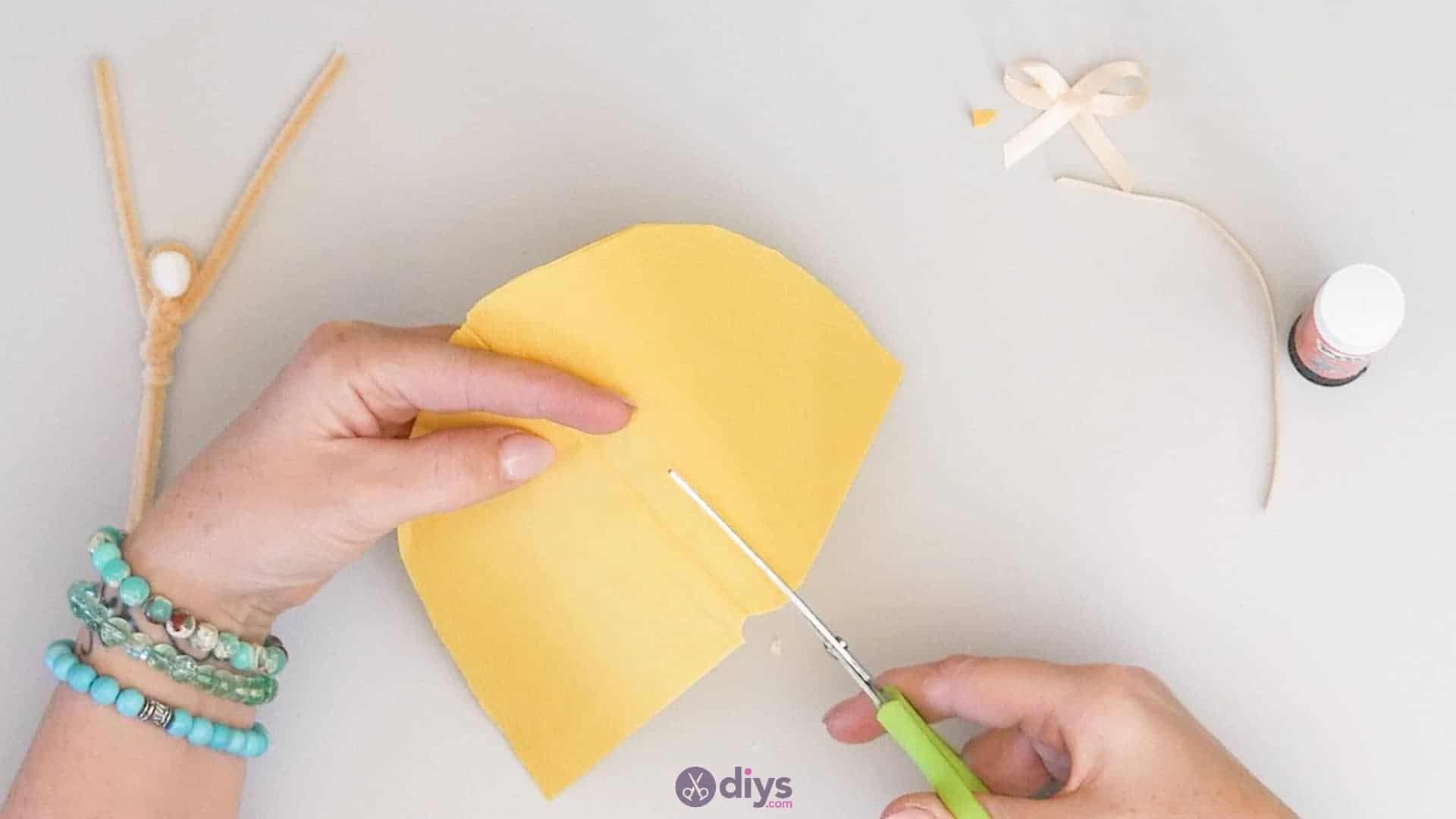 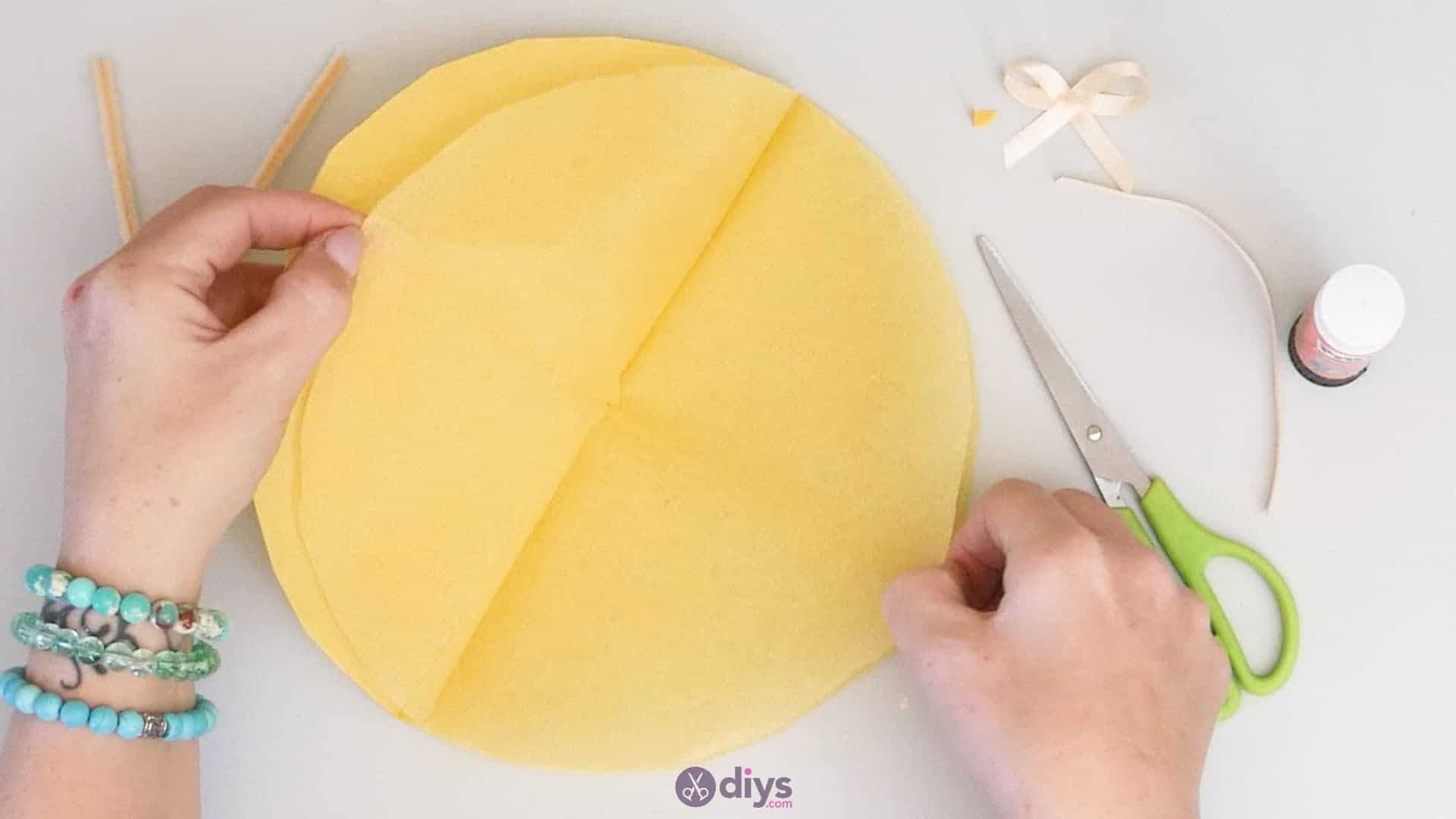 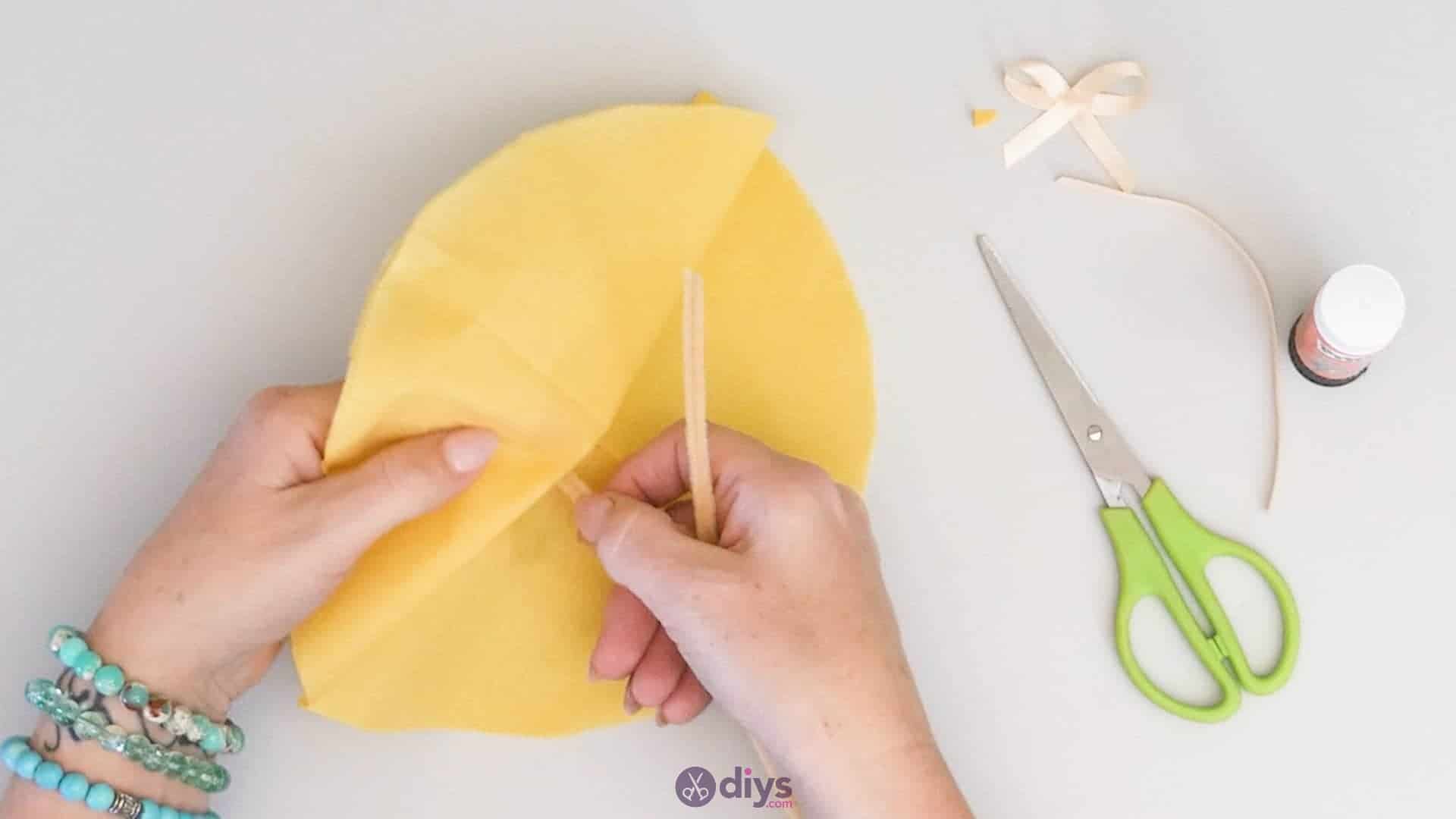 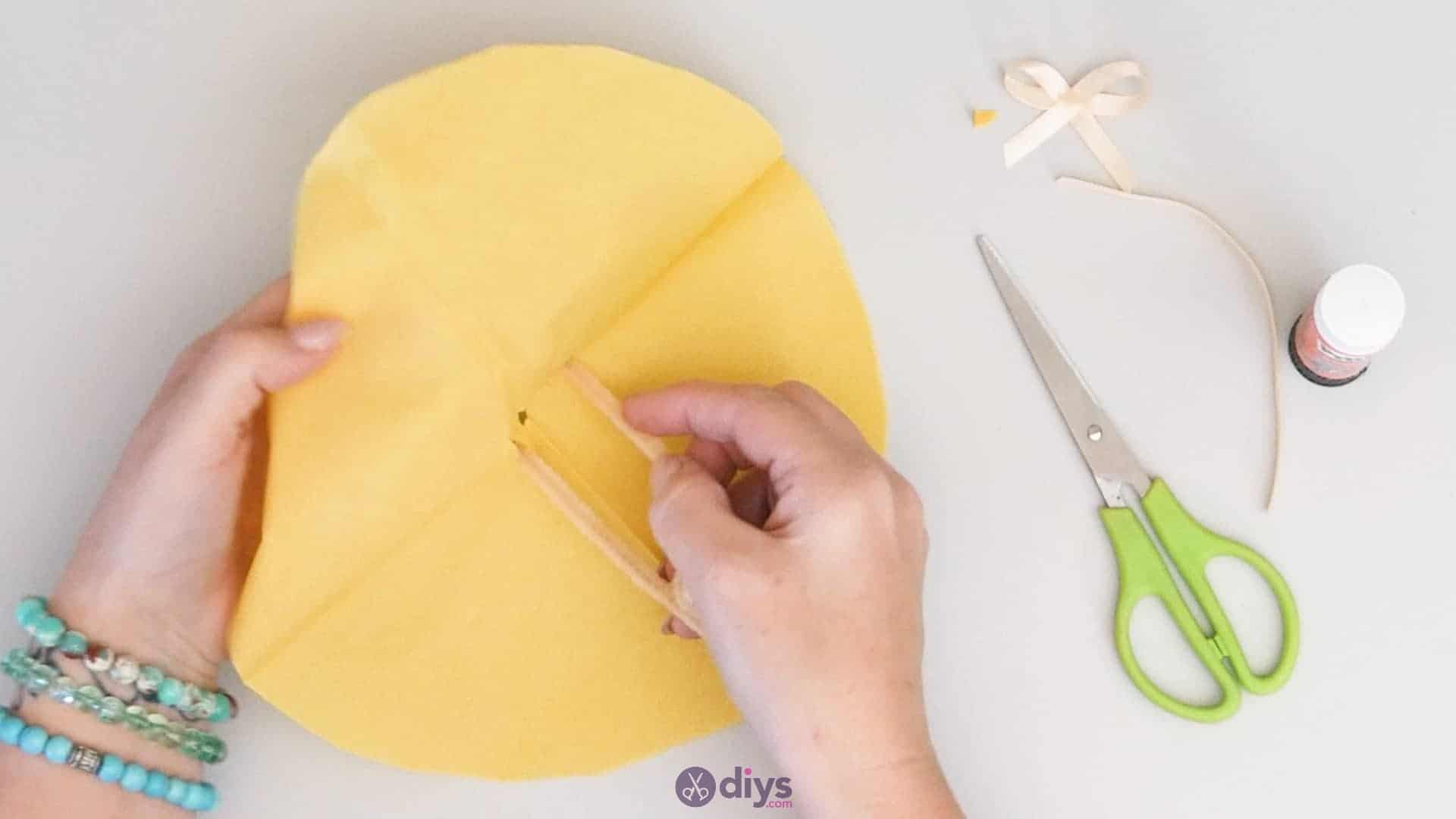 Now open your napkin up completely, finding the bottom of all the layers in what you’ll see becomes a circle. From the underside, put the ends of your puppet’s two pipe cleaner arms up through the very small slits you cut on either side of the hole in the centre. As you push them through, the pom pom head will fit right through the hole between them. Your puppet is now wearing a napkin dress 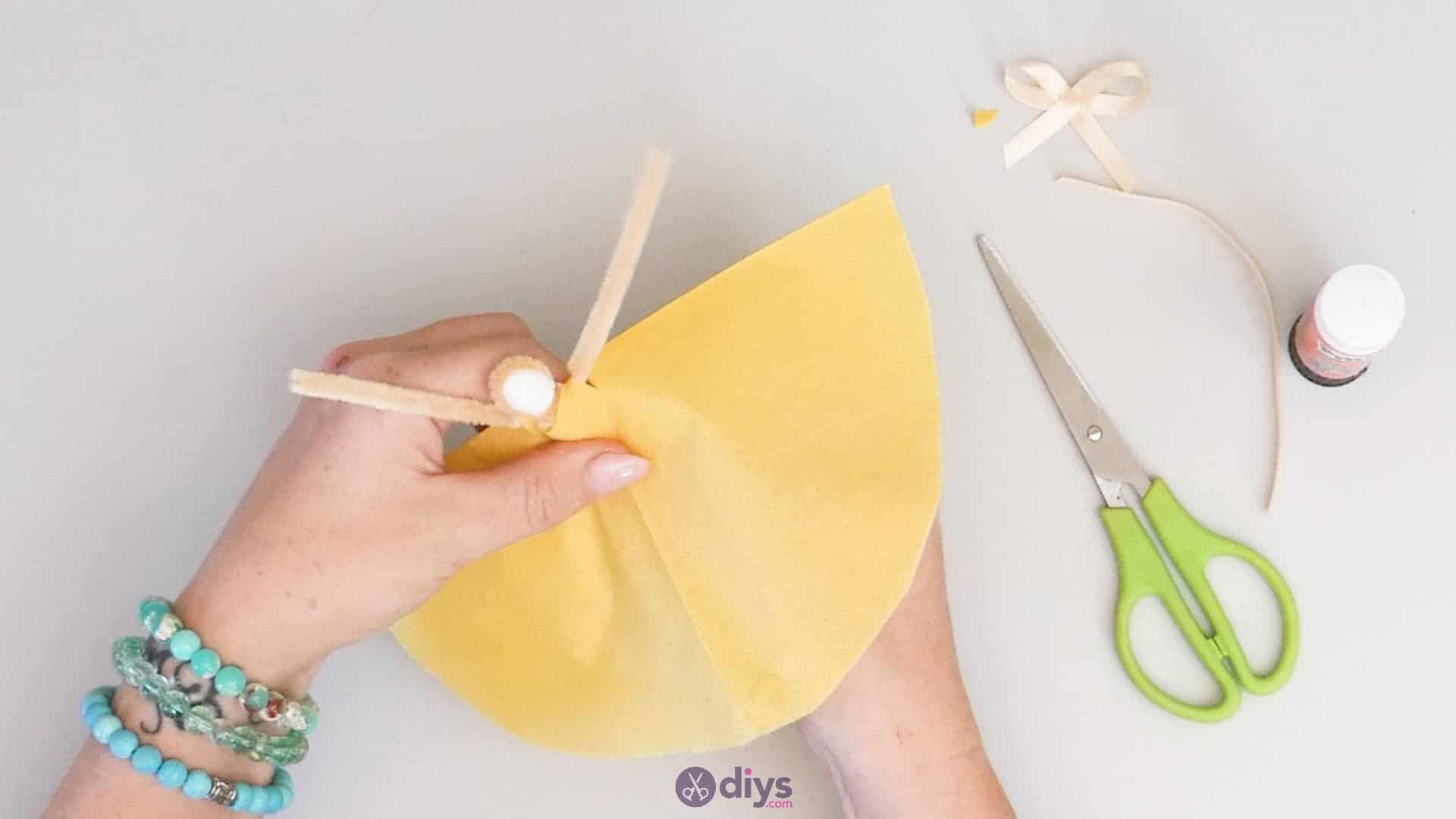 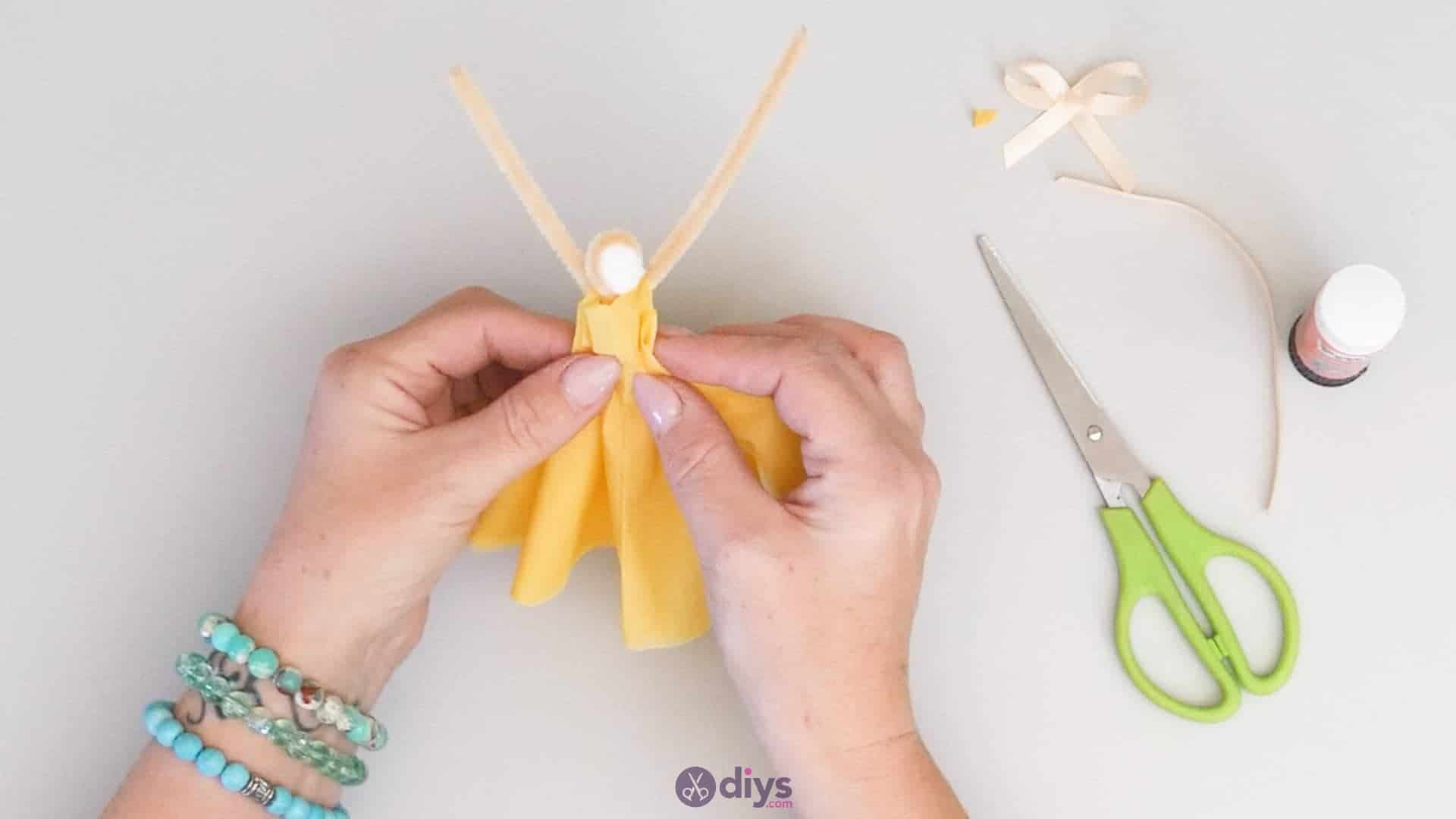 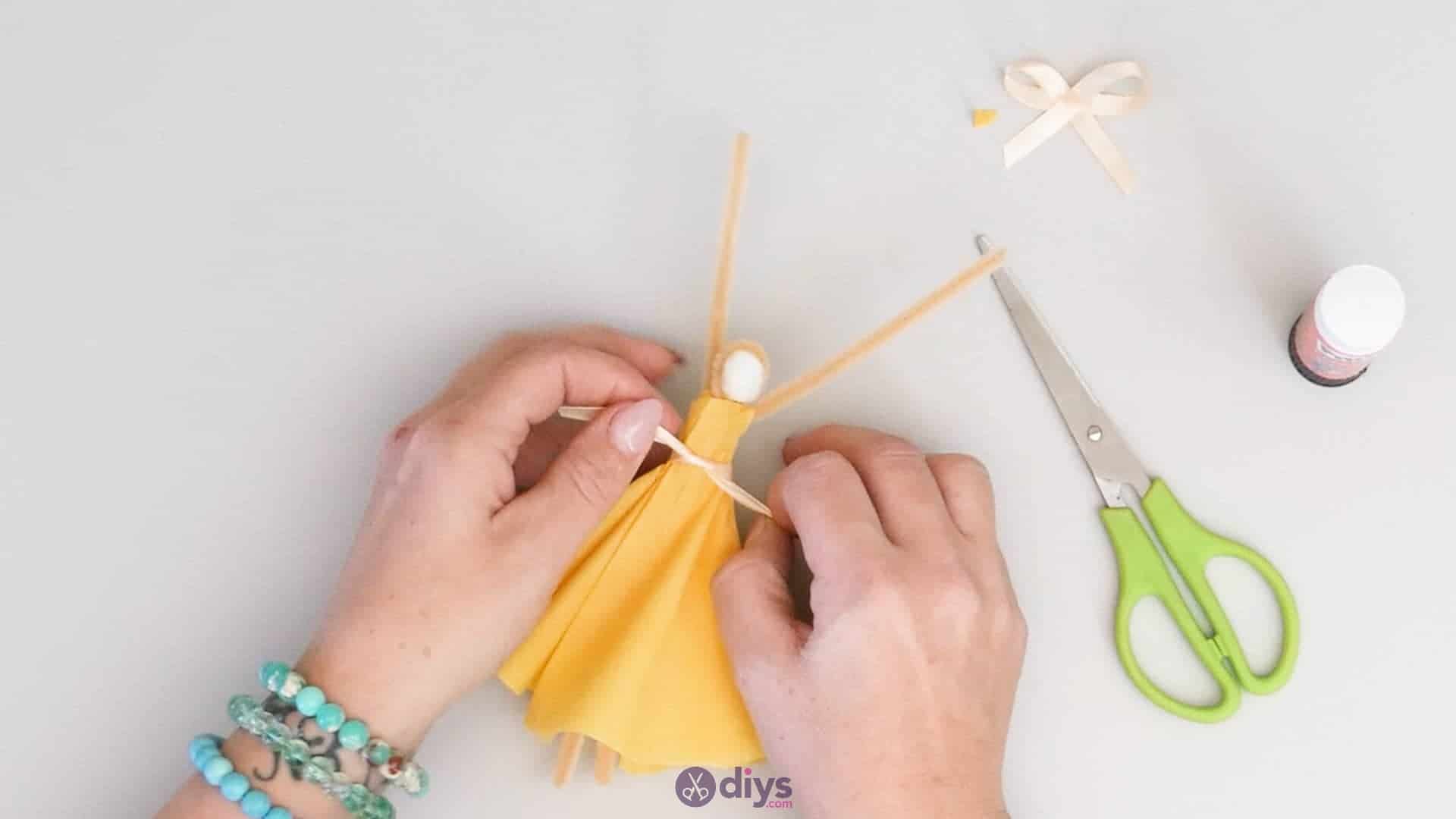 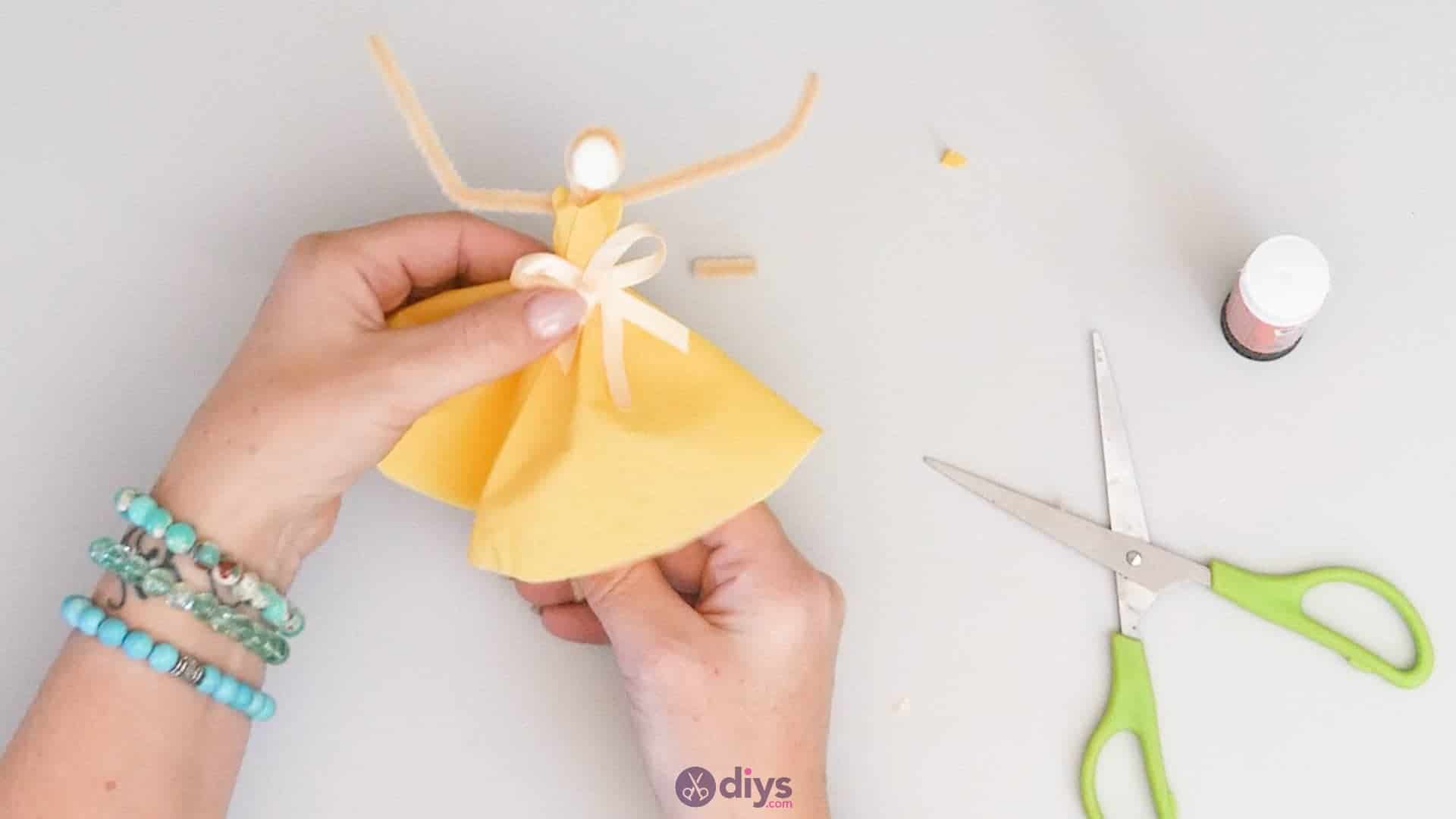 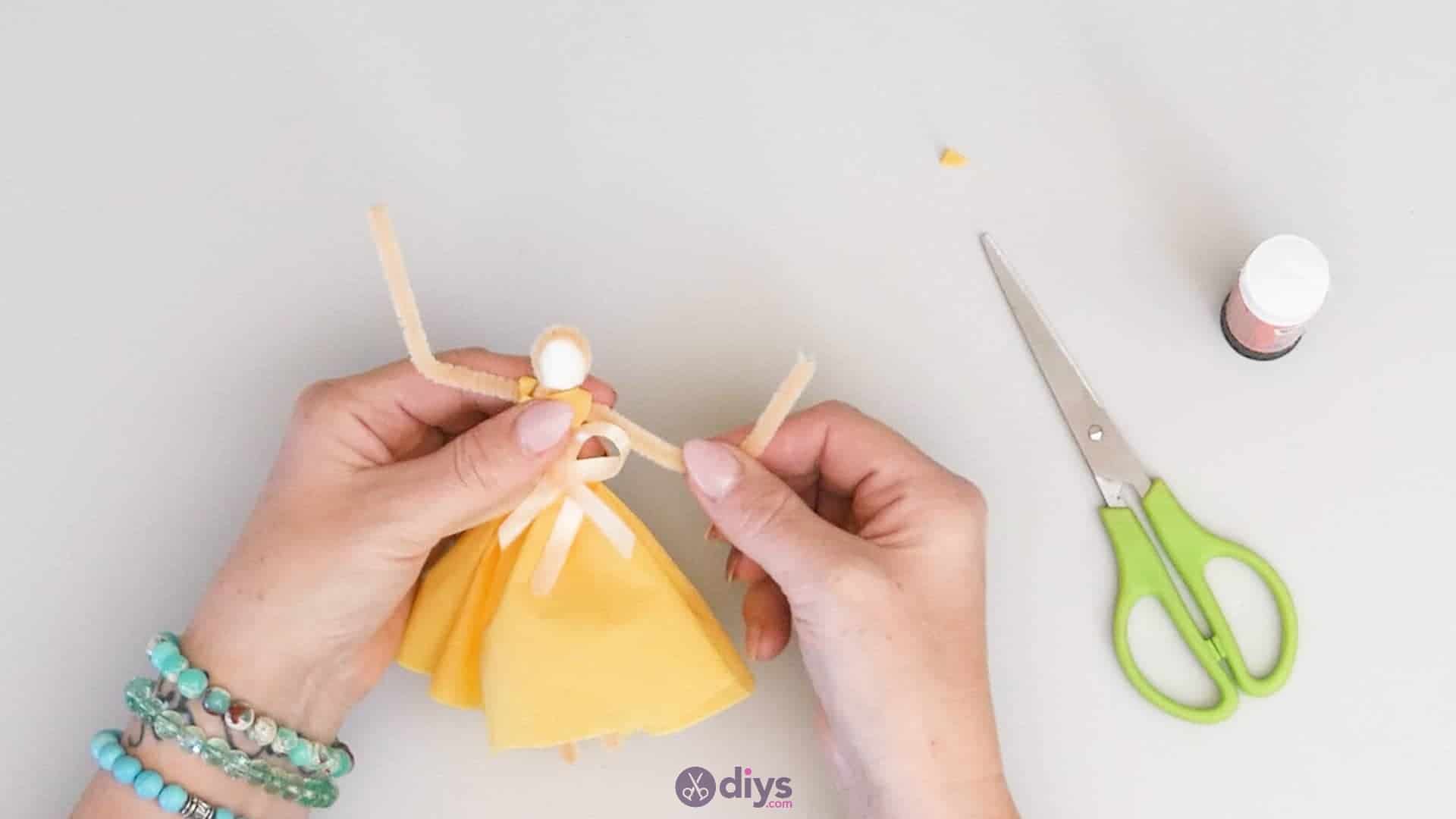 Cinch your paper napkin dress in at the puppet’s waist, below the arms, gathering it together so the skirt can flare out below. Take another piece of ribbon (I cut a piece of about two inches) and tie it around the cinched section like a sash, keeping the “fabric” gathered in place. I tied mine in a double knot to keep it from untying. Next, apply glue to the back of the little bow you made earlier and stick it down over where you tied your sash. You can choose to have your bow and ties at the front of the dress or the back; I chose the front! Finally, position your puppet’s pipe cleaner arms to look like she’s dancing. 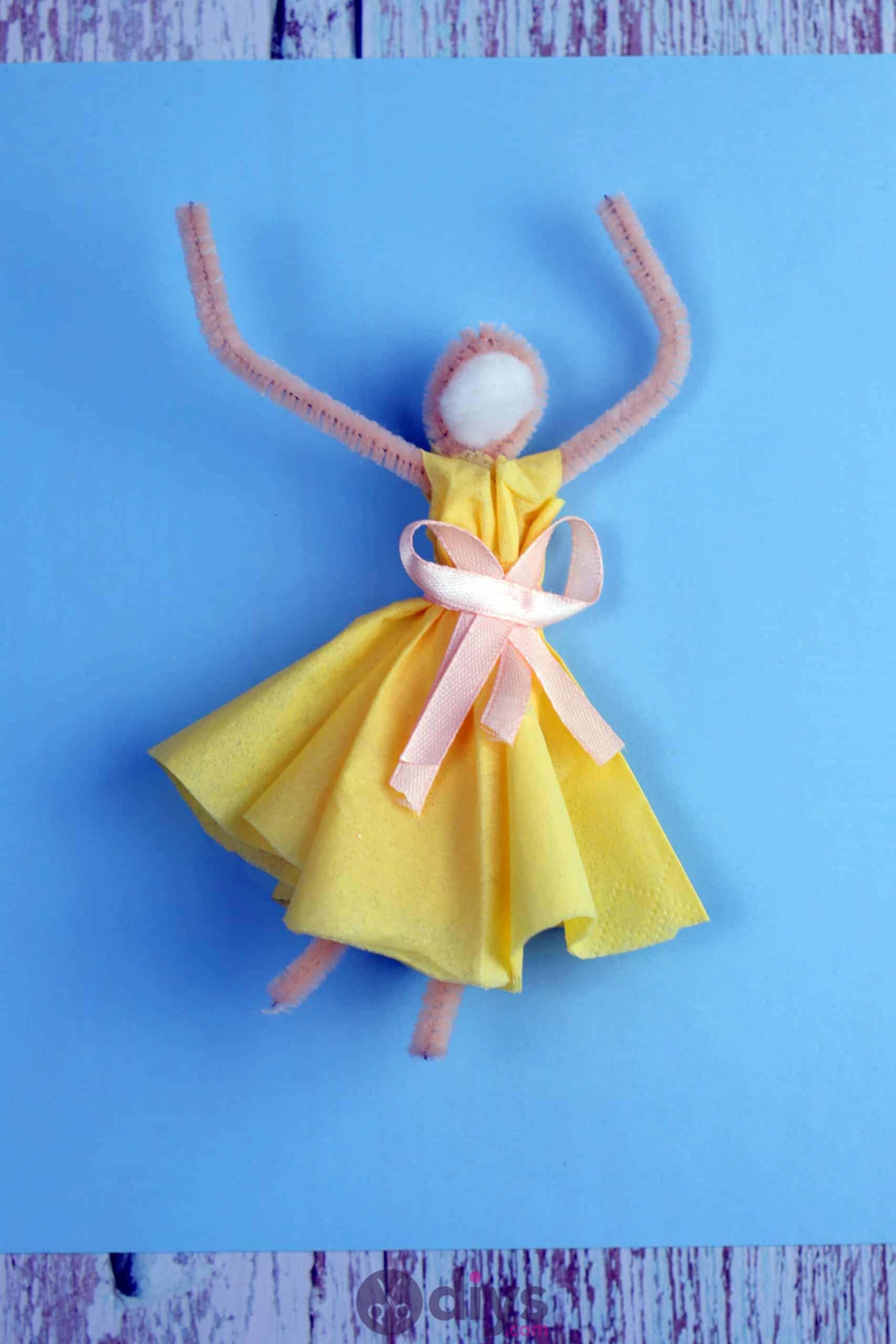 Your puppet is all ready to be posed and played with! Of course, you can use whatever colours you like in any of these supplies. You could even add yarn hair if you have some scrap yarn lying around! Just in case you’d like to try this project out for yourself, here’s a fantastic tutorial video to help you!

The post How To Make A Dancing Napkin Puppet appeared first on DIYs.com.