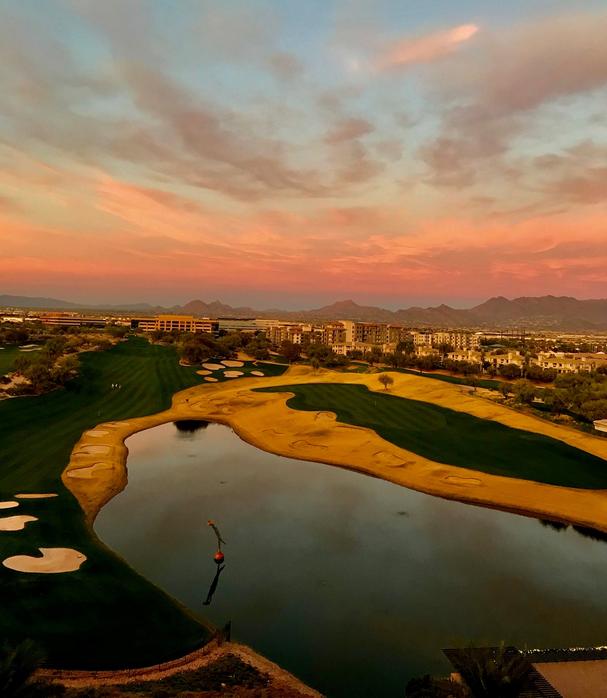 For snowbirds looking for South American climate paired with fine wine and cuisine at a luxurious resort, look no further than the Westin Kierland Resort & Spa in Scottsdale, Arizona.

As we drove up the drive, lined with towering palm trees, and walked into the lovely lobby, we know we were in for a treat! The Resort is located in the picturesque Sonoran Desert and the style of the buildings fits right into the surrounding countryside. We checked into our room and enjoyed the daily bagpipe music and the sunset. The views of the mountains and the golf course were stunning.

After sunset, it was time for some fine dining. Along with several other restaurants and lounges, deseo (yes it is spelled with the lower case d) offers an award-winning dining experience. The traditional Latin American cuisine will provide you with a real culinary journey. Chef Derek Biazo grew up in Kingman AZ, just northeast of Scottsdale and spent childhood vacations learning to cook in Mexico, which, along with some fantastic childhood foodie experiences in Quebec and Maine, led to his career choice as a chef. His eclectic experience led him to the culinary program at his high school, and then on to the Scottsdale Community College using a scholarship that he won in a cooking competition at the age of 16.

Our meal started with the Millionaire Tacos, with ahi tuna, Japanese Hamachi fish and cassava, which is a root vegetable that grows in sub-tropic environments (it is also known as yuca and is where tapioca comes from). And they tasted like a million dollars! 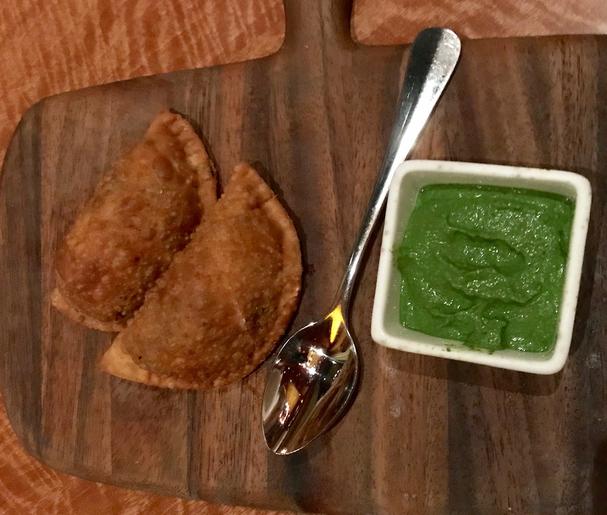 Michael hi-jacked my go-to choice of lamb! His Colorado Lamb Loin had a mustard, plantain crust, and was served with creamy quinoa, rosemary chimichurri and lamb au jus. It was a challenge to get him to give me a bite but I persisted and can report that it was delicious! I ordered the Wagyu Hanger Steak which is served churrasco style, with papa criolla (roasted Andean potatoes), hon-shimeji mushrooms, and an Argentinian chimichurri. Along with the meal we enjoyed some pan de bono (or pandebono), a wheat-free bread made with cassava flour. A very special wine greatly enhanced the meal the 2014 TapizBlack Tears Malbec, sourced in the Uco Valley of Argentina. This well balanced and rich, fruit forward wine was scored 92 points by Wine Enthusiast Magazine. And speaking of Wine Enthusiast Magazine deseo was given the Award of Excellence by Wine Enthusiast in 2017. And we agree!

Later that evening, we were privileged to be able to attend a special presentation in the Ali-Shonak Library just off the lobby of the hotel. This library is not your typical library. You might find a few books there, but they would all be about the joy of Scotch. The library boasts over 300 different whisky labels poured by Library Ambassadors, who are all experts in single malt and blended whiskys from Scotland. And the ones we met were also in kilts!

Our tour of the joys of scotch was titled Masters of Scotch: Glenmorangie Deconstructed. Glenmorangie has been making Scotch since 1843 on the banks of the Dornoch Firth. Our guide tonight was Dan Crowel, who led us through several tastings, each paired with a dessert wine or port, and a variety of nibbles. Our favorite was the Lasanta - aged 12 years in ex-bourbon casks. It is a smooth malt whisky, with rich notes of raisin, toffee, and spices. (A terrific choice as a birthday present for a certain, loving wife.) An excellent way to end the day. 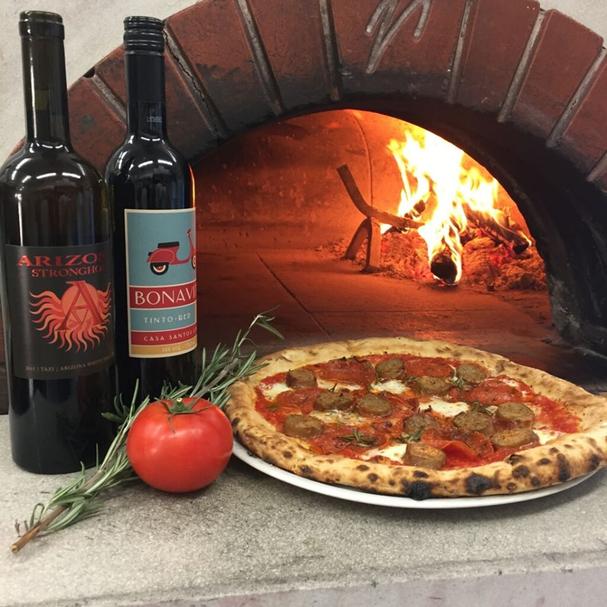 There was so much to do and see (and eat) at the resort that we didnt need to go elsewhere, but Im glad that we did. As we headed out for our field trip, we walked through the Kierland Commons, a beautiful upscale shopping district. Just a 10-minute walk later, we jumped onto the 72 bus to take us on the 30-minute bus ride to the Craft 64 beer pub located in Old Scottsdale. Craft 64 - Wood Fired Pizza, Craft Beer - Scottsdale AZ Did I say beer pub? This may be the only beer pub that actually has a wine sommelier on staff.

Along with 30 Arizona craft beers (of which ten are their own), Craft 64 also has a pervasive wine list. And award-winning food! Their pride is their wood-fired pizza oven which heats up to over 900 degrees. 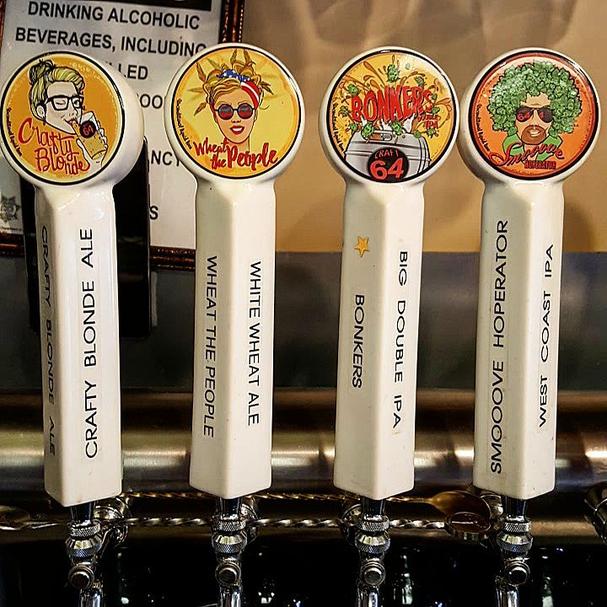 All those choices for beer! I tried the Mosaic Grapefruit Haze IPA. Im always a little hesitant about fruity IPAs. So often, the citrus overwhelms the hops. But this one was great. Just a light note of grapefruit. Michael went with the Rocky Point Blonde which he found to be light and refreshing with more body than he expected. For our second round, he tried Wheat The People. Mainly because Michael liked the name of it, but he is also fond of wheat beers. He enjoyed the slightly heavier texture of this one. For my second, I stuck with the Mosaic. 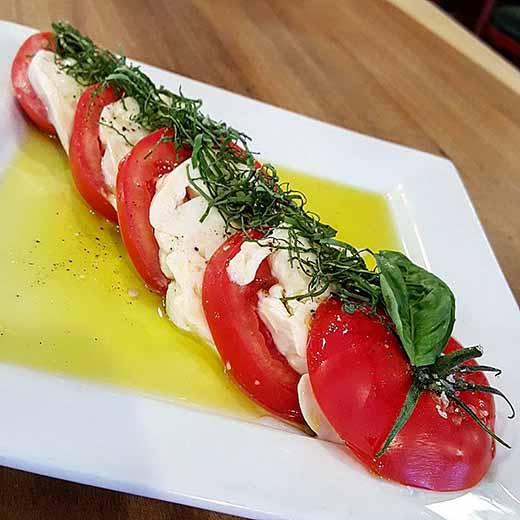 Now to the food: Michael had the Farmers' Market salad with kale, spinach, beets, red onion, crushed pistachios, and white balsamic agave dressing. I couldnt pass up a chance for lots of the house-made mozzarella, so I went with the Caprese.

We split the daily pizza special with house-made mozzarella, Parmigiana Reggiano, and feta cheese, topped with red onions, cherry tomatoes and pistachio paste. So delicious a light and crispy crust and the tartness of the cheeses were perfectly balanced with the sweetness of the tomatoes.

The restaurant is run by four co-owners, each bringing a wide swath of hands-on experience. Josh Ivey is an Advanced Sommelier, Roger Carpenter previously owned a popular Australian wine bar and bistro, and Scott Hagen and James Swann both bring an extensive beer knowledge and are well-known in the local beer culture.

After walking around Old Town, looking into the many art galleries, Southwest and Native American gift shops, and a veritable United Nations of eating establishments, we worked up another thirst, so we stopped into Goldwater Brewing.Goldwater is a family endeavor, with Greg McClelland as founder and director. His wife Pam designed the brewery space, his son Chad is the head brewer. The youngest son Dillon is the creative director, and his son-in-law Jimmy Disken is director of operations and tasting room manager. And nephew Carl Duderstadt runs and maintains the steam-powered brewing system. Whew!

The taproom is cool and sleek, making me feel like I was having a beer in the middle of the brewery. I had the Hop Chowda IPA which is a hazy IPA with mango and citrus. It has a pretty low IBU for an IPA (35) but was refreshing and fun. Michael had the Hundred Dollar Pils, which he found to be light, with herbal notes and a very invigorating finish. Perfect on this warm, sunny day.

Back to the resort to enjoy our final day. We walked around to check out all of the amenities. First and foremost is the Agave The Arizona Spa, which offers a vast selection of body treatments and salon services, many of the spa treatments are inspired by local native cultures.

The resort offers an adult pool with lap lanes, hot tub, and private cabanas. If you have your kids with you (or your inner-kid) the Adventure Water Park is not to be missed. The water park features a flow-board simulator for surfing, a lazy river tube ride, and a 110-foot long waterslide! And for those traveling with families, who are looking for some adult-only quiet time, Kierland offers the excellent (and fun!) Kids Camp for children aged 4 12.

It was time for lunch, so we strolled to the Brittlebush Bar & Grill, which is next to the golf course.You cant miss the 27 hole course (with three nines), which takes full advantage of the sweeping scenery, creating a lot of natural beauty and challenges. They offer a wide range of ways to get around those 27 holes. Along with the more traditional golf carts, youll find golf boards, bikes, Segways, and TurfRider. We dont golf but perhaps we should take a spin after lunch.

The Brittlebush offers some great light choices for fueling up before hitting the links, or for grabbing a beer after. We had been given strict instructions that we order the Polenta Tots. Well, Michael steers away from starchy food like Tator Tots, and Im not terribly fond of polenta but we decided to go for it. And so glad we did! The delicious little tots were dusted with cornmeal and served with chipotle aioli. We also shared an order of Pretzel Sticks, served warm with a spicy jalapeno mustard and a Scottish ale cheese sauce. A huge step up from the hot pretzels you get at the ballpark (no disrespect meant I love those, too)! 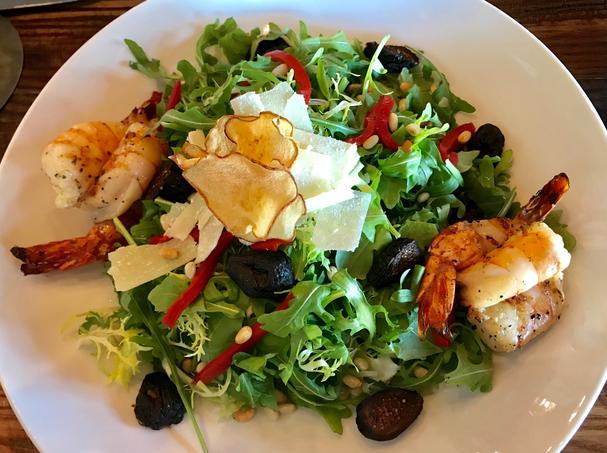 For a salad, we had the Deconstructed Fringeof artisan greens, bruleed brie, heirloom tomato, boiled eggs, craisins, toasted sunflower seeds, avocado, and poppy seed dressing. That could have been a meal by itself. 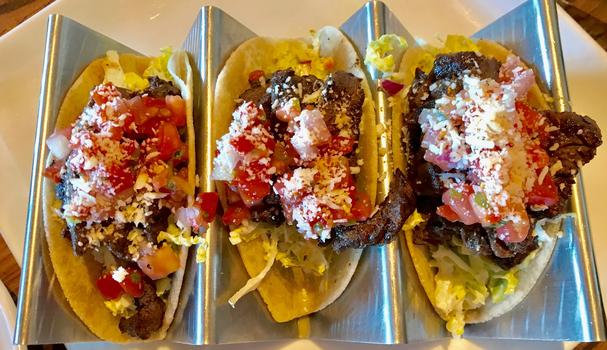 Michael went for the Spicy Steak Tacos, which was grilled adobo skirt steak, jalapeno slaw, cotija cheese, cilantro, pico de gallo, on flour tortillas. He loved the flavor of the ancho chili marinated steak. And then we topped the whole thing with some of the best Bread Pudding Ive ever tasted. It was a bit fluffy without any sogginess and had a rich caramel taste! According to Michael it is the bread pudding meant to convert people who dont like bread pudding (which he can attest to). Oh, wait! Did I say this was a good place for something light? Well, this did count for lunch and dinner for us so I felt justified.

Well, too much great beer and great food, so the hike we had planned went onto the next time list. Our plan is to check out the McDowell Sonoran Preserve Gateway Trail, which is just a 15-minute car ride away. After that, we may have time for the spa treatments I put on the next time list when Michael wasnt watching.