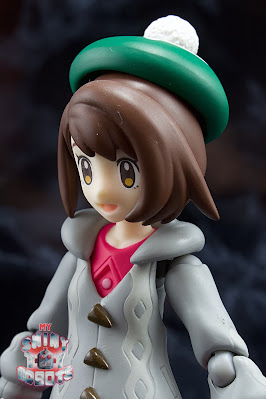 Release Date: August 2021
RRP: 9900 yen
While things have definitely gotten a lot better in recent years when it comes to getting Pokémon toys of things other than the Pokémon themselves, it feels like most companies are still only scratching the surface when it comes the vast universe of human characters the franchise has to offer. Take Max Factory's Figma line for example, who to this day have only released a total of six characters in their ever popular range. The fourth release, as well as the first from 2019's Pokémon Sword & Shield, is Figma SP-134 Yuuri - the female avatar in the game perhaps better known to the rest of the world by her default Western name of Gloria. Another release exclusive to the Pokémon Center store (though also accessible through channels such as middleman services and Amazon), Yuuri is the third trainer avatar release - following on from Red in 2017 and then Mizuki (Selene) in 2018. 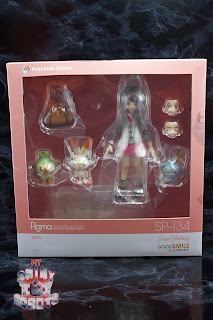 There's packaging that keeps it simple, and then there's Figma packaging. The brand clearly want the figures themselves to be the main selling point, as the packaging has been fairly plain since it went through a redesign some years ago. The pink and white colour scheme perhaps isn't the most fitting one for the character, but it's certainly vibrant. The front of the box is all about showing off the figure, since it has very little in the way of anything else. The text at the bottom is pretty small, and even the Pokémon Center logo on the top is fairly well disguised. The back and sides however have some great images of the figure in various poses, as well as all the great accessories she comes with. Inside all these parts are neatly laid out on the plastic tray, with the stand parts and hand tree bagged up underneath. 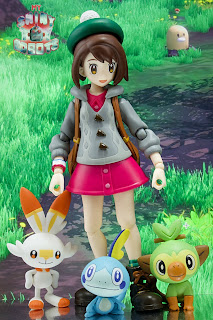 Figma Yuuri comes packaged in her default Pokémon Sword & Shield attire, which admittedly has much less relevance in the game now that clothing has become customisable but still carries a lot of weight in the game's promotional material and such. This outfit consists of a thick grey cardigan with bright pink dress underneath, green beret, hiking boots and tartan socks for that special Scottish touch. True to the game's design, underneath the dress are a pair of black shorts. Figma might not have done that many Pokémon figurines in the grand scale of things, but they do know their anime girls and so the sculpting on this release is nothing short of fantastic. Yuuri feels like she leapt straight out of the game, and the vibrant colours of her dress really stand out against the duller colours of the rest of her attire. The beret is actually removable (and not just as a means of taking the face apart to swap the face plates), but taking it off does leave a rather obvious hole in the head so hiding that when posing without it is a must. It's also pretty cool that they made the plug the same size as Mizuki's, meaning the pair can effectively swap hats without any issue. Yuuri's design was great even before all the memes surfaced and the character resonated with audiences even more, so it's wonderful to see Figma really do her justice.

Yuuri doesn't come alone however, because as always one of the biggest draws of these Pokémon Figma are the Pokémon that they come with. Also in the set are static figures of all three Galarian starter Pokémon - Grookey, Scorbunny and Sobble. Though they may not be poseable all three figurines are beautifully detailed, again with vibrant poses as well as simple poses that show off a lot of personality. Although basic Pokémon figurines of this size are a dime a dozen and have been brilliantly supplied through TakaraTomy's MonColle range for some time now, there's something particularly satisfying about this trainer figures coming with such good representations themselves. Particularly in the case of the avatar trainers, as getting all three starters along with them really makes them feel like special releases. 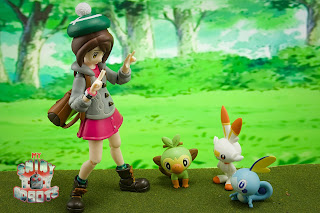 Yuuri features a great range of articulation, most of which comes from Figma's distinct brand of ball hinge joints. These have all been implemented in the neck, shoulders, elbows, wrists, hips, knees and ankles of the figure, along with additional ankle tilts and hinged toe sections for additional poseability. The shoulder ones are made up on two joints, giving Yuuri butterfly joint-style movement with the same buttery smooth articulation the rest of the figure has. The skirt is made of a softer plastic with does have a little bend if needed, but honestly there's plenty of range in that area even without it. Despite these figures being so well articulated there's a certain daintiness to the Figma line that makes it so unique (not to mention successful!), but it doesn't come without its cautions. Those wrist joints feel particularly fragile, and given that Max Factory themselves include a spare in the box it's clear they know if too. 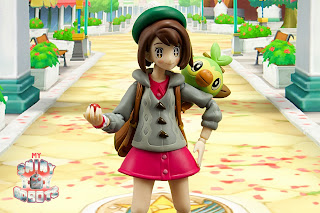 In addition to the three Galarian starter Pokémon, Yuuri also comes packaged with two alternate faceplates, nine additional hands, her backpack, a Pokéball and her Dynamax Band. Technically the Dynamax Band is already fitted around her wrist in the box so whether it should be considered an accessory is debatable, but her official GSC webpage claims it's one so let's just roll with it. The alternate faces included are a serene closed eyed expression as well as an excitable starry-eyed look - a selection perfect for posing and those League Card snapshots. The hand selection on offer is equally brilliant, with plenty of League Card pose hands in addition to the usual open hands and closed fists. There's even an additional right hand to hold the Pokéball, though it doesn't have an especially good grip on the accessory. Red's hands did the job perfectly, but then again his Pokéball was significantly bigger than both Yuuri and Mizuki's. Yuuri's weird satchel/backpack combo is one of quite a curious design, plugging straight into the figure's back but curving downwards to become much thicker at the bottom. Rather than have a stand port in the middle of the bag ruining the design, the hole is located on the underside. Overall it's a really solid set of accessories - the Pokémon themselves may be the main draw but it's great the Yuuri herself wasn't forgotten about either.
This is all of course supplemented by a standard articulated Figma stand - something included with every Figma release. Yuuri's also features two adapter pieces - one for the figure and one for the backpack. 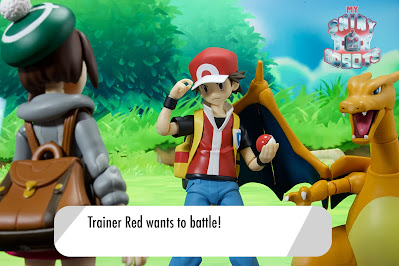 There's no denying that the Figma Pokémon range are incredible figures, and Figma Yuuri (Gloria) might just be the best of them all. There's just so much personality that's been imbued into this figure, and as usual Max Factory deliver extremely high quality when it comes to sculpt and paint. The only problem is this figure is damn expensive for what she is. The Figma price hike of the past few years has been utterly ludicrous, and big ticket items like this are exactly where it's most apparent. Both Red and Mizuki were a reasonable 6926 yen, while Yuuri (despite not really coming with anything more significant) is a whopping 9900 yen. There's also the baffling decision of making this release a Pokémon Center exclusive, which isn't so confusing in the context of the other trainer characters but is when somewhat lesser Sword/Shield characters (Marnie and Raihan) are more easily accessible. Figma Yuuri costs a pretty penny, but Pokémon fans are unlikely to be disappointed with her.