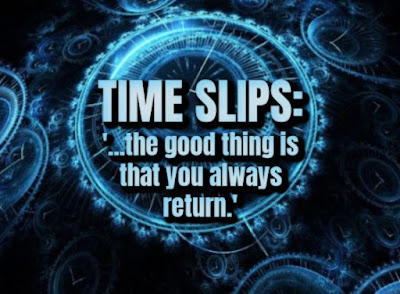 This is actually good because it conforms to my understanding of TIME through Cloud Cosmology.  We travel through TIME one page at a step.  It is thus possible to momentarily step out of our current spot laterally when it does not have too much interfereance.  since we are dominent in our own TIME line, we tend to pop back easily enough while picking up memories.
In this case, a gap opened up for him and a couple came from the forties forward and became disorienterd before obviously popping back.
I do think that this happens often when there is no interference and explains many oddities.  I also think the time gaps are not so large, but then we would hardly notice.
This case is important because it provided almost a test tube experience.
Time Slips: '...the good thing is that you always return.'
Thursday, December 09, 2021
https://www.phantomsandmonsters.com/2021/12/time-slips-good-thing-is-that-you.html?
A British man describes a recent 'time slip' event at an international airport that left him questioning similar events that have occurred throughout his life. Have you had similar incidents?
I recently received the following account:
"Myself and my two youngest kids were at the international airport (I assume it was at Heathrow. Lon) recently. We were catching a bucket flight to Paris. When the flight was announced it looked like the waiting area just emptied and headed down a passenger corridor including my two kids. As I started down the single long corridor, I realised I was well behind the group. At the end of the corridor, they all went downstairs. They had gone.
I felt lonely in this empty corridor but kept walking. Then I heard footsteps behind me. I thought I am not alone. I glanced to my right, and there was a man in a brown suit and shoes, wearing a 40’s style suit. I glanced to my left and saw a woman smartly dressed in black jacket, skirt and black half heel shoes, handbag with short black hair.
About 10 yards later I stopped hearing the man’s footsteps. So, I quickly looked to my right, but the man wasn’t there. I glanced to the left; the woman was still there. When we got to the stairs, I stopped to let the woman go first. But she wasn’t there, I looked back along the corridor there were no ramps off the corridor. Yes doors, but if they used one of them, they would have dropped 20+ feet.
I headed down the stairs and met my son, I asked where Paige, my youngest daughter, was. He replied she went back up the stairs to look for you. I looked back up the stairs my daughter started down the stairs. Her first words to me were, how did you get here? I said I came along the corridor and down the stairs. She said, dad you weren’t there. I went back along the corridor to find you and you weren’t there! I said I was there. No, you weren’t! I said it seems to have happened again. The kids know about these events. We boarded the flight to Paris.
Well, any crackpot could come up with this. However, this has happened to me since I was 7. Unusual, yes, but maybe not, I don’t know. I can enter a room and be in a completely different time and place. When they started happening, my mother said the good thing is that you always return. She wasn’t phased by it. She said she had seen a lot of comic book stuff in Germany in 1945." Regards, IN