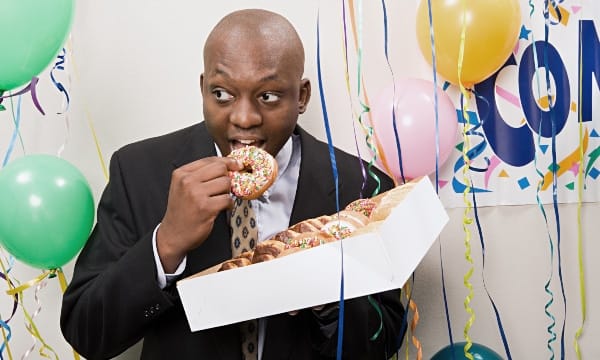 One of the most human things we can do is give another a heads up. It is the ultimate courtesy. It means, on some level, that you have acknowledged another person.

Keeping that in mind, on the drive to my office this morning after an early client meeting, I scarfed down an icing-covered pastryan apple fritter, the one pastry I might actually kill for. I was famished and between rhyming along to vintage Biggie Smalls and taking bites with my windows down and my system up. I couldnt have cared less about crumbs, decorum, or who saw me.
As I parked and trotted from my car into my building, though, I passed six different suited and booted busy-looking people who met my gaze. Several were on cell phones, smiled awkwardly, and then looked away. A couple of them just looked away hastily, leaving me to wonder if I was scowling unwittingly or maybe had some schmutz on my face.

Turns out it was the latter. Person number seven, a barista from the cafe in my building, stopped me in the lobby before I could step onto an elevator. She literally held up her hand like a crossing guard, said, Hold up! Pause! I stopped on a dime like we were playing freeze tag.

I need you to do like this, G, she said, rubbing her the corners of her mouth.

So, I whipped out my iPhone, reversed the camera and stared at a mouth flecked with icing. Six people had let me walk past them, looking like Tyrone Biggums and hadnt said a word. One young woman, clearly in a hurry as well, took a moment to give me a heads up. I thanked her. She smiled, said, Of course! Thats what were here for. Have a good one! And she continued on her way.

Her we? She wasnt talking about her cafe colleagues. She meant, we, as in humans.

I generally loathe good-old-days or I was raised to talk. But this is a thing. I was raised to give people a heads up if they need one. It should be the easiest kind of critique to give because done right, its discreet and almost impossible to assign malicious intent.

There is a difference between giving a heads up and sticking your nose where it doesnt belong. Dont like how loud or obnoxious a little kid is being in a store or restaurant or some other public space? Its not your place to lecture the parents on how you feel about that kid. You have no idea what theyre going through.

But seriously, people, if you see someone in at work or in public about to trip or slip or fall, or with:

It really is a demonstration of your humanity, your acknowledgment that the people you pass during the hustle and bustle arent just obstructions in your path, drainers of your time, nuisances to your mission. Theyre real people. Like you. We can all use a break or a simple act of kindness.

Leaving folks hanging by denying them that heads up is a d*ck move. Dont be that person. It shouldnt be that difficult.

This post was previously published on Medium and is republished with permission from the author.

If you believe in the work we are doing here at The Good Men Project and want to join our calls, please join us as a Premium Member, today.

The post The Lost Art of the Heads Up appeared first on The Good Men Project.