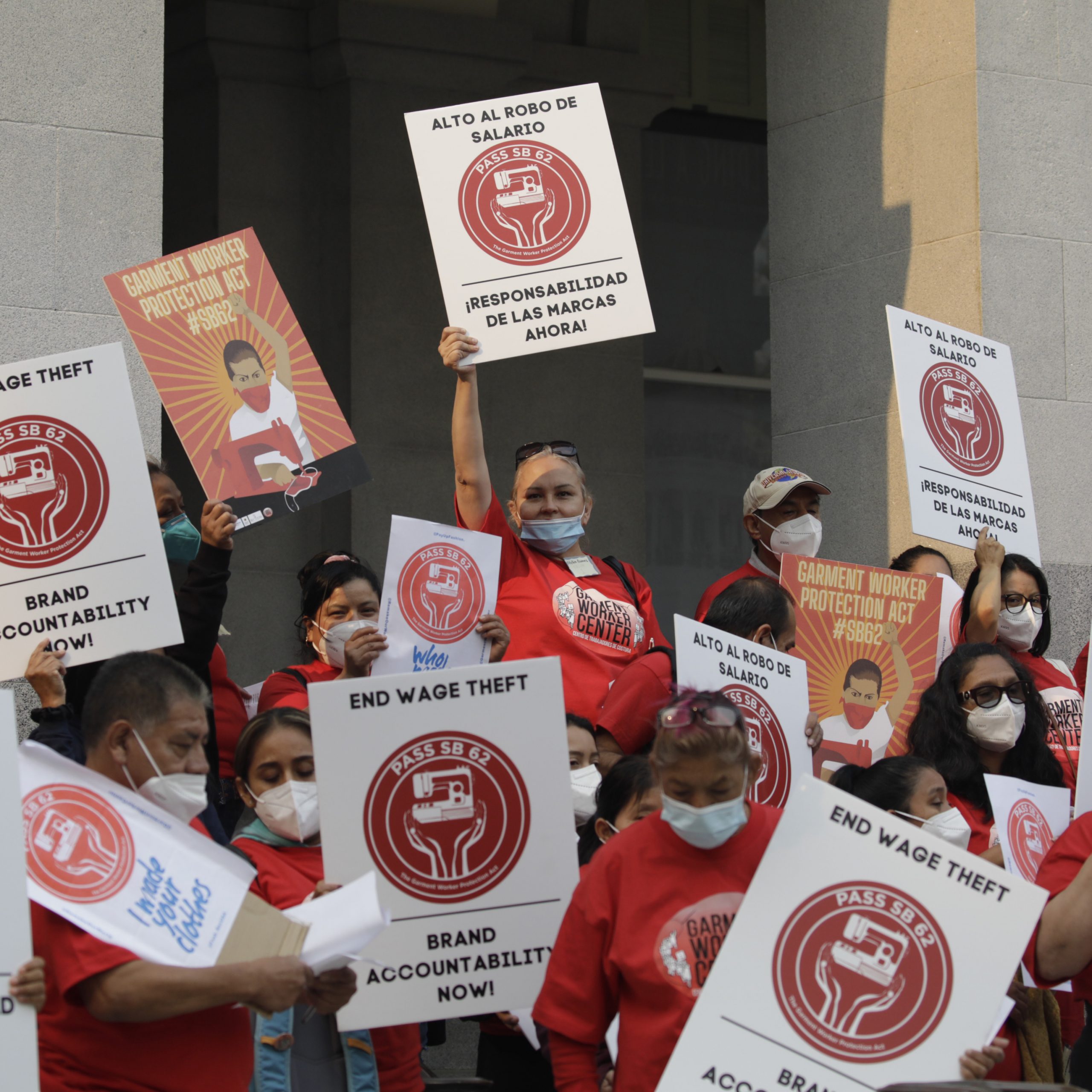 For decades, the “Buy American” movement has been partly predicated the faith that American-made garments are more ethically produced than some of their overseas counterparts. But the truth is more complicated. Yesterday afternoon, California’s state legislators gathered to vote on the Garment Worker Protection Act, or California Senate Bill 62 (SB 62). It has been a long fight up until this moment, as the bill is a reincarnation of another bill last year, SB1399.

There are two main sections to the bill. First, it seeks to eliminate California’s long-standing piece-rate system, which critics say factories use to skirt around California’s minimum wage laws. In Los Angeles, where many garment factories are based, the minimum wage is $15 an hour. But by paying workers by the piece — 5 cents to sew a side seam, or 10 cents to sew a neck — workers effectively take home a median of $5.15 an hour, according to a 2016 UCLA Labor Center study. “We work 60 to 70 hours a week for a salary of $250 to $300,” says Santa Puac, a former garment worker and mother of three. “It’s not enough to take care of our families.”

The second part of the bill proposes to make brands jointly liable for what labor advocates call “wage theft.” In other words, workers have the right to file claims for wages stolen, which is calculated as the difference between what they were paid and what they should have earned under minimum wages laws. Workers can bring wage claims against all parties involved — the factory, subcontractor, and clothing brand. If the defendants are found liable, it’s up to them to negotiate between themselves on how to split the damages. “Technically, all actors found liable can negotiate, but practically, we’ve seen a lot of contractors and manufacturers not complying, not showing up for the hearings, and so on,” says Marissa Nuncio, Director of The Garment Worker Center, one of the worker rights organizations co-sponsoring the bill. “In which case, the brands would still be on the hook for the unpaid wages. The brand liability aspect gives workers and their representatives actual leverage to get those unpaid wages back, whereas there’s not any leverage for them to use in the process right now.”

Daisy Gonzalez, a lead organizer at The Garment Worker Center, says wage theft is widespread in this industry. “The federal Department of Labor found that 85% of the factories they visited in a four-month period weren’t paying workers what they should,” she told me over the phone. “These factories aren’t just producing for fast fashion brands, they’re also making for higher-end labels. They employ skilled workers, some with twenty or thirty years of experience, and doing jobs that involve industrial machinery. However, many workers don’t earn even the minimum wage because the piece-rate system pays so little. It can vary from two to fifteen cents, and the pay rate can vary by the period. A garment worker might be told she’ll get eight cents apiece for her work, but then at the end of the week, the employer might bring that pay rate down because they have too many pieces.”

The bill has gone through some predictable fights, which have fallen along capital versus labor lines. The California Chamber of Commerce put SB62 on its list of “job killers” this year, stating that the bill threatens to burden non-unionized employers and push brands to manufacture outside of California. Some industry organizations have also come out against the liability provision. In a written statement to the California legislature, the American Apparel and Footwear Association wrote: “[T]here are elements of this bill that we support. However, the brand guarantor provision, creating joint and severable liability, represents an extraordinary misunderstanding of who is responsible for the payment of workers’ wages and will worsen the situation of garment workers by creating an exodus of brands from California and subsequent job loss. This will only exacerbate the economic pressures behind the situation the legislation is intended to avert.”

Kate Alexandria, a spokesperson for The Garment Worker Center, says the joint liability provision is necessary because many factories are fly-by-night operations. “We’ve had laws on the books for a while, trying to hold factories accountable for the wages they owe workers. But because of how these businesses are set up, many will disappear in the middle of the night after workers bring forth wage claims. Then they pop up again under a different business name and continue getting contracts from the same brands. Ultimately, these brands are profiting off the loopholes in this system, which is why it’s important for us to get joint liability. They’re the ones who control this environment. For a long time now, brands have incentivized this race to the bottom, where they’re giving contracts to factories at rates that are so low, it virtually guarantees that a minimum wage cannot be paid.”

Alexandria adds that there are discussions right now on how brands can limit their exposure, which will ensure that jobs won’t be lost in California. “It’ll be the responsibility of brands to decide how they’ll ensure their supply chains aren’t engaging in wage theft. But among the ideas being discussed, brands can put a stipulation in their contract that requires manufacturers to carry insurance or bonds that will cover wage claims.”

California is home to the nation’s largest garment manufacturing hub, and employs over 40,000 people, most of whom are immigrant women from Mexico and Central America. The piece-rate system is not only common in California but also across the US and other parts of the world. In Italy and England, garment workers are commonly paid by the piece, including in higher-end sections of the trade, such as bespoke tailoring. Martin DiBattista, the founder of the outerwear production company Better Team USA in Clifton, New Jersey, says that piece-rate systems are a way to improve productivity. “A factory owner can set the machines to complete a task in a certain amount of time, but they can’t control for the human element,” he explains. “Piece-rate systems allow you and the worker to share in the responsibility of the output. Often, piece-work is better than an hourly rate because a sewer can hustle and make more than they would under the minimum wage. But you have to set the piece-rate system correctly. Factory owners know what they’re doing. If they’re setting things too low, they’re taking advantage of people and that’s not right.”

The new California law still allows factory owners to incentivize productivity targets. Workers can be paid at a piece-rate, but at the end of the day, the take-home pay has to be at or above what they would have received under minimum wage laws. DiBattista said he tried this system at his factory in New Jersey but found that it added a level of administrative burden. “When I tried to implement this, I found that you have to do a certain amount of paperwork to compare the piece-rate pay rate to the hourly wage. There are software systems that you can buy, which will help you track these pay rate systems, but as a small shop, it wasn’t worth it to me to track all these fees.”

DiBattista adds that such burdens may be challenging for those in the commodities market, such as t-shirts and simple cut-and-sew dresses, where margins are much thinner, and businesses live and die by their volumes. This is why he moved upmarket to higher-end outerwear, which requires a certain level of skill that allows him to justify higher prices. DiBattista is proud to pay his workers above the minimum wage and at an hourly rate to ensure quality. “I’m passionate about American manufacturing,” he says, “but at the end of the day, American manufacturing has to be about providing people good jobs and elevating the community. People are taking a more critical look at how their clothes are made today — they care about the wages, the conditions, and how things are produced. The ‘Made in America’ label has to mean something.”

Yesterday afternoon, California’s Assemblymembers gathered for a final debate on SB62. “These are Californians!” stressed Assemblywoman Lorena Gonzalez, co-author of the bill. “Women in sweatshop-like jobs making $2 an hour.” When the final vote was taken around 5 pm, there were fifty “ayes” and nineteen “noes” (eleven Assemblymembers did not cast a vote). The vote fell along party lines, with all the ayes coming from Democrats and all the noes coming from Republicans. The bill is currently headed to the California State Senate, where it’s expected to pass a procedural vote and then will be put on Governor Gavin Newsom’s desk. If signed, SB62 will go into effect on January 1st, 2022.

The post The Hidden World Of Wage Theft In US Garment Industry appeared first on Put This On.