Meghan Markle could wear pretty much anything and I’d pretend I like it. I’m just supportive like that! But this time around, there’s absolutely no faking it—our girl looked positively divine at the 2021 Salute To Freedom Gala. She always makes a statement with her attire, but it’s not often we see her in something so grand. I mean, she was a duchess, after all! Can you blame me for wanting a little ballgown action??? Fortunately, Markle’s red gown did not disappoint.

Markle arrived alongside her husband, Prince Harry, who also looked incredibly dapper, sporting his military medals, a red poppy pin and the cross for Knight Commander of Royal Victorian Order around his neck. Prince Harry is no longer allowed to wear his military uniform since parting ways with the royal family, but I guess attaching the medals to a tux is some sort of a loophole.

Not that it matters much, because all eyes went straight to Meghan. Markle sported a voluminous red Carolina Herrera gown with halter straps and a deep U-shaped neckline. The skirt featured large pleated panels from the waist and a massive slit up the center. 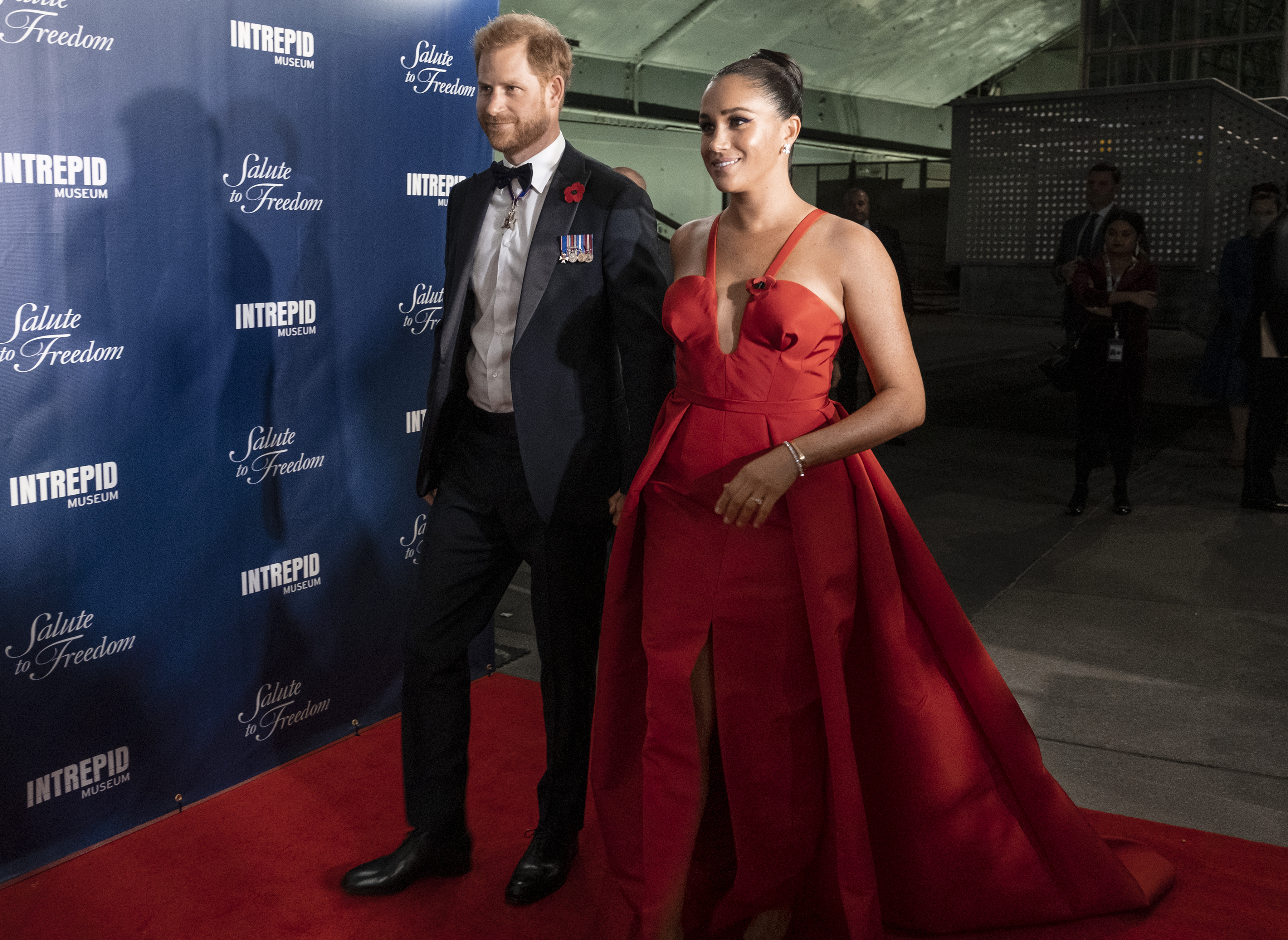 Talk about making an entrance! This duo certainly got the job done. To complement her gorgeous gown, Markle ditched the messy bun for the evening and opted for a sleek, high updo and some glittering earrings.

Oh, and I can’t forget the back. *Cue TikTok voice* Let’s hear it for the back of the dress! The train was short but effective—and by effective, I mean it made me gasp with delight. Mission accomplished, Meg! 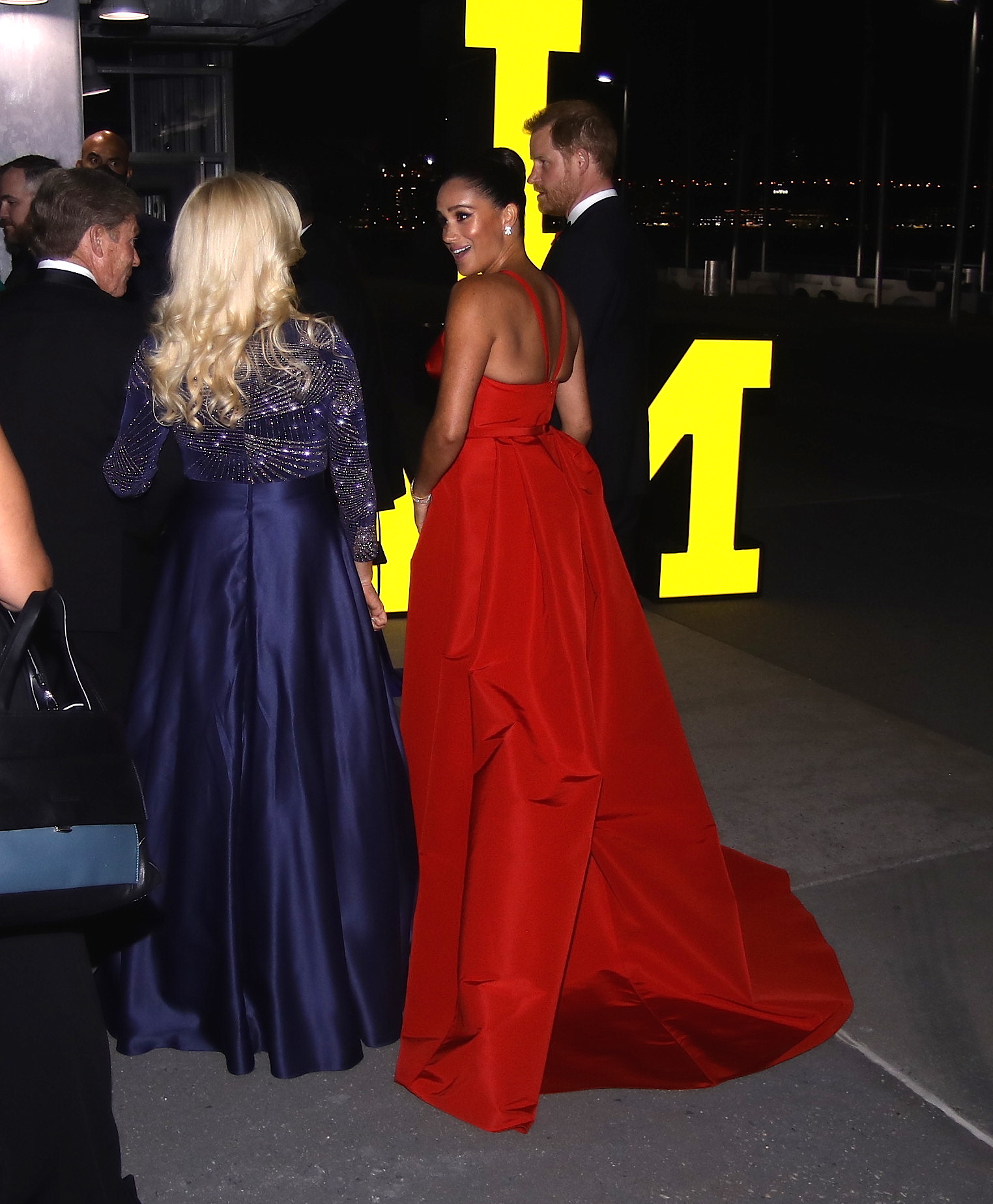 And of course, Twitter absolutely ate up Markle’s look. While a few naysayers tried to argue it was too low-cut or inappropriate, pretty much everyone in the Twitterverse agreed that she looked breathtaking. And also, that she should wear more red, which I wholeheartedly agree with.

Of course, the evening wasn’t all about the carpet. The Salute to Freedom Gala, held at the Intrepid Sea, Air & Space Museum, is an incredible event held to honor the men and women of our military for exceptional leadership. Prince Harry gave a speech before presenting the Intrepid Valor Awards to five accomplished service members.

During the speech, he encouraged the honorees to really take in the moment and allow themselves to accept the recognition they deserved. “Throughout my time in the military and after, I recognized and understood that for many who have served or are still serving—it might not feel right to stand out amongst the team and be recognized,” he said. “But you deserve to be — and tonight, whether you like it or not, that is what’s happening. So, soak it up.”

All in all, it seemed like a wonderful evening. Not to mention a perfect opportunity for Markle to remind us she’s still a sartorial force to be reckoned with! This look has me itching for more red carpet moments soon, so fingers crossed she makes it happen. We’ll be waiting, Meg!