Guruvayur Temple is one of the popular temples in town by the same name, dedicated to Guruvayurappan – a form of Shri Vishnu. It is situated in the southern state of Kerala. Often referred to as Bhuloka Vaikuntha or Abode of Vishnu on Earth. The temple is maintained by Guruvayur Dewaswom which manages the activities. It is a thriving township in the Thrissur district of Kerala. Situated about 29 KMs northwest of Thrissur town.

Guruvayur is regarded as a combination of three words – Guru for Guru Brihaspati, Vayu for God of wind, and Ur means land in local language Malayalam. Brihaspati is said to have deified the murti of Shri Krishna that he found at the beginning of Kaliyuga along with the Vayudeva. The land where he placed the murti came to be known by the name.

In Narada Purana, it is mentioned that Janmejaya, the great-grandson of Arjuna was cured of his leprosy after he worshipped at Guruvayur Temple. His father Parikshit was cursed that he would be killed by a snakebite. He was killed by Takshak, the king of serpents. Janmejaya conducted a ceremony of fire sacrifice to kill all the snakes of the world including Takshaka. Hundreds of snakes were killed. But Takshaka was saved by the grace of a Brahmin called Astika. Since he had killed the snakes, he was afflicted with leprosy. He was cured only after he worshipped Guruvayurappan at Guruvayur.

The Dutch attacked the temple and set it on fire in 1716 CE. But it was rebuilt in 1747 CE. Haider Ali attacked Calicut and Guruvayur but spared the temple. However, his son Tipu Sultan set fire to the temple and plundered. But it was saved due to timely rain. The moola Vigraha or the main deity was hidden underground by the devotees and was thus saved. Later, the temple was rebuilt and renovated. By the 20th century, various reforms were also done by the temple administration.

The temple routines as laid down by Adi Shankara are strictly followed. Vedic traditions are followed with utmost precision and sanctity is maintained. Temple opens for the devotees at 3 AM and closes after the day’s puja at 10 PM. Puja here can be divided as Morning Puja, Afternoon Puja, and Evening Puja.

The morning puja starts with Nirmalyam when the temple opens at 3 AM. The first darshan of God is called Nirmalya Darshanam. Devotees get an opportunity for the first darshan of God when he is woken up from the deep slumber of the previous night. He is bedecked in decorations from the previous day. This darshan is considered as the most auspicious as God is believed to be most powerful this time.

After the Nirmalya Darshanam, God is bathed with sesame oil. The murti is made of stone of medicinal value. Hence the oil used for bathing is considered as Prasad. It is available at the counters to purchase and believed to cure diseases like paralysis. After the bath, the murti is smeared with a herbal mixture called Vaka.

The deity is bathed with water fetched by a priest from the temple pond called the Rudrateertham. The water is poured over the deity using a conch. Post the Abhishek, the murti is bedecked with attires and decorations. Sandal paste and jewelry adorn the deity. He is decorated as infant Krishna, wearing a red loincloth and holding butter and a flute in his hands. Then malar a form of puffed rice is offered to God as Naivedyam.

After Malar Naivedyam, the sanctum sanctorum is closed for Usha Puja. The deity is offered with different Naivedyams like butter, ney payasam, a special kind of banana, jaggery, a special sugar, and a mixture of sweets. Puja begins before sunrise and continues till the first rays of the sun fall on the feet of the deity, which faces east. At this time Ganapathi Homa is also conducted and pujas for other deities also take place.

After the morning puja, the silver and gold Vigraha of the deity is taken around the temple in a holy procession on a temple elephant called Seeveli. Generally, the gold Vigraha is used and the silver one is used on special occasions. This ritual symbolizes the God overseeing food offered to his guards, the Ashtadigpalas and the Saptamatrika along with Veerbhadra and Ganapathi.

After Seeveli, the murti is bathed again in waters drawn from the temple well. This is followed by Abhishekam or immersing the murti in milk, tender coconut water, and rose water. The deity is then decorated as a teenager adorning a yellow dhoti.

This puja is done by a set of traditional priests. It derives its name from the length of the shadow cast by the sun’s rays – Pantheeradi or 12 feet. The sanctum sanctorum remains open for the devotees after this puja till the next ceremony is performed.

Ucha Puja is done after 11:30 PM, behind the locked doors, when the temple is closed for devotees. During the puja special offering of payasam or kheer is offered to the deity. A temple musician sings the verses from Jayadeva’s Geeta Govinda. The temple closes at 12:30 PM and again reopens at 4:30 PM for evening puja and darshan.

The evening puja starts with Deeparadhana. While the temple is illuminated with lamps at sunset to the chanting of hymns. Sanctum sanctorum is reopened for the Kapoor Arati.

Around 7:30 PM the temple again closes for final puja. Deity is offered with various dishes as Naivaidyam such as appam, Ada, Palpayasam, betel leaves, and areca nut. Following the puja, the deity is again taken out in a procession on the elephant called Seeveli.

Thripukka is an important ritual performed here in which the sanctum sanctorum is filled with fresh smoke made up of special powder that is believed to cure breathing problems.

There are many lamps lighted by devotees on a frame called Vilakkumatham. The lighting of lamps surrounding the temple is an ethereal sight.

Similar temple rituals are followed for Srinathji at Nathdwara.

There are smaller shrines inside the temple courtyard dedicated to Shashtha, Durga, Subramanya, Ananta, and Ganapati.

There are several smaller stones called Ballikallu around the sanctum sanctorum. They represent Ashtadigpalikas or the 8 direction deities and Saptamatrikas or the seven mother goddesses.

The temple is one of the finest examples of Kerala‘s temple Vastu vidya. You can enter the temple through two gopurams – one on the east and another on the west side. Both the gopurams have two Deepa Stambha. The gopuram leads to a courtyard, in the center of which is the main temple. The roof of the temple is like a pyramid fitted with tiles. Different shrines dedicated to other deities are housed in the courtyard. Most of them have a room that has the deity, but the roof is a tiled structure.

The center of the courtyard has a pillared hall in front of which is a Dhwaja Stambha or the flagpost. There is a Deepa Stambha towards the east gopuram. The hall leads to the Sreekovil or the main shrine. Innermost room of the Sreekovil is called Garbhagriha that enshrines murti of the deity. In front of the Garbhagriha is the Mukhamandapam. Outside the Mukhamandapam is the namaskar mandapam.

On the south side of the shrine is a temple dedicated to Ganesh. Hall surrounding the Sreekovil has sculptures from the life of Shri Krishna. A huge structure of Shri Vishnu sleeping on Sheshshaiyya with Bhoodevi and Sridevi on either side is there. It is said to be similar to the Padmanabhaswamy Temple at Thiruvananthapuram.

Exit door at the north leads you to a hall like structure where devotees can have Prasadam. On the northeast side is a temple dedicated to Devi. On the south side of the central shrine is a temple dedicated to Shashtha or Sri Ayappa. The southern side has a hall with huge utensils for cooking the Prasadam. On the northern side are the temple tank and well. The outer wall of the inner sanctum has murals depicting Krishna Leela.

Moolavigraha here is made up of a sacred stone called the Pathalanjana Shila.

Strict dress code is maintained in the temple. Men to wear dhoti and to enter shirtless. Women can wear Sari, long Kerala skirt, and top or salwar kameez.

Ulsavam – Takes place in Feb-March. It’s a ten-day festival that starts with the hoisting of flag at the Dhwaja Stambha.

Vishu – The Malayali new year is an important festival here.

Shri Krishna Janamashtami – One of the most important festivals across the country which is celebrated during Aug-Sept to mark the birth of Sri Krishna is popular here too.

A famous Shiva Temple situated nearby. The main presiding deity is Shiva. Constructed in the pagoda style. Other shrines are dedicated to Ganapati, Vishnu, Subramanya, Ayappa, and Kali. Shivaratri and Ashtami Rohini are two major festivals celebrated here. They say that a visit to this town is incomplete unless one has visited this temple.

This is a post by Shruti Mishra under Inditales Internship Program. 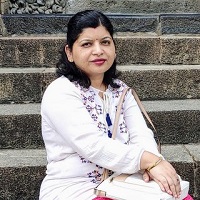 Shruti Mishra is a professional banker. She loves to travel and explore the rich heritage of different places and enjoy their local cuisine. She is a book lover. And also likes to cook a warm meal for the family. She currently lives in Bangalore. Has dreams to extensively explore this beautiful country completely and write a book on the roads less traveled.