In 1999, Sleater-Kinney released their much-awaited (by me but also the world) fourth album, The Hot Rock. It was a different time, 1999. Yes, there was internet but there was basically nothing on it. You still bought records at the store and the only things you'd know about a band were the things they revealed to you on the record cover and liner notes (and okay, maybe they did had a small feature in your favorite music magazine, but that's it!).

The point is, you (I?) spent a lot of time alone in your (my) room looking at the cover of an album, usually while listening to it, trying to gleam meaning from it. Here's what I knew about the band at the time: it was made up of Corin (Tucker), Carrie (Brownstein), and Janet (Weiss, which is the same name as Susan Sarandon's character in Rocky Horror Picture Show, and was very confusing for a while). Corin and Carrie had dated but they didn't anymore. They were on the Kill Rock Stars, which I had learned was a very cool label. Everything else about them was a mystery. 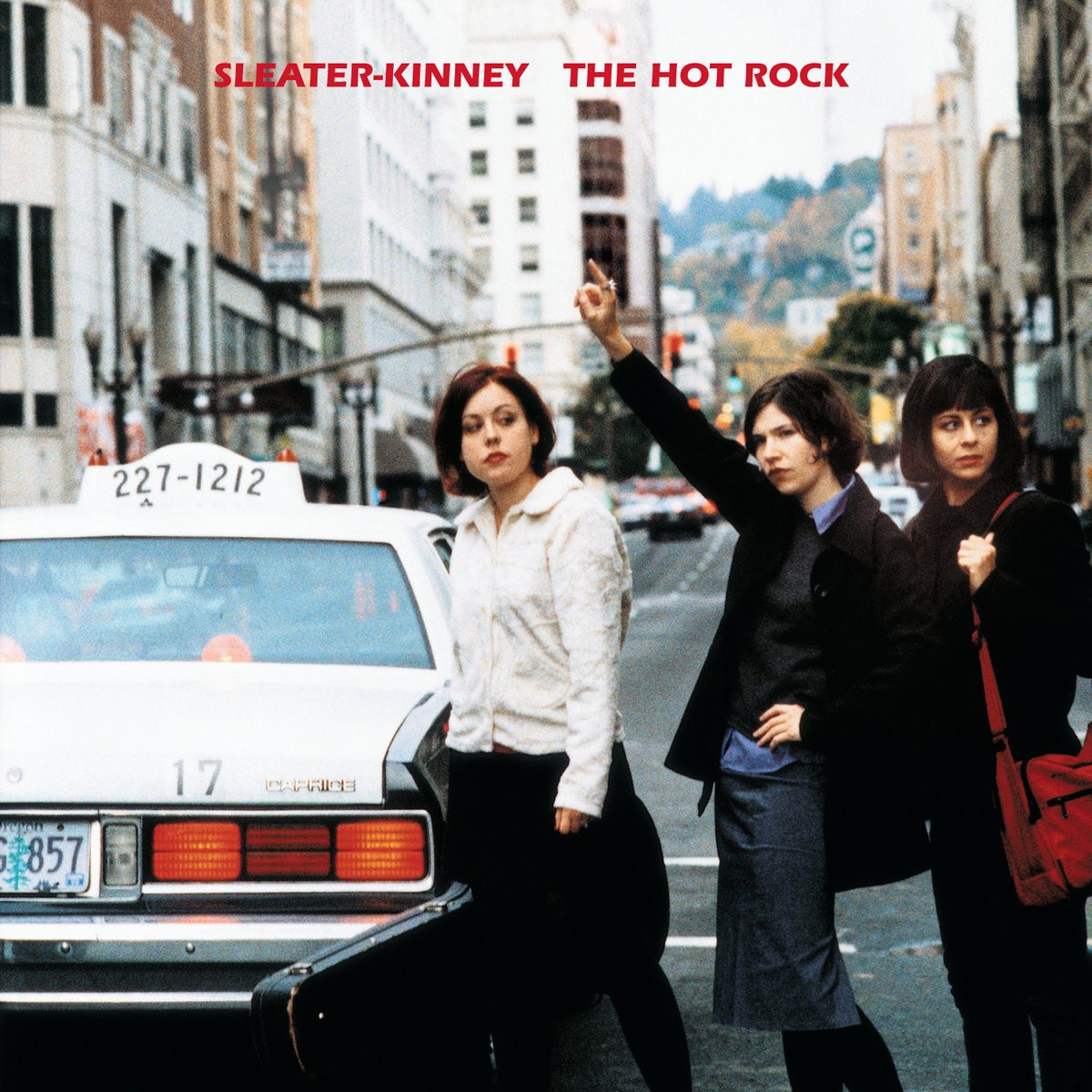 Corin Tucker, Carrie Brownstein, and Janet Weiss on the cover of Sleater-Kinney's 1999 album "The Hot Rock."

Also a mystery was what was going on in their record cover. The photograph looked old, like it was from the '70s maybe. Carrie is hailing a taxi, Corin is closest to the taxi but she is looking over her shoulder, watching out for someone but maybe also lost in thought, and Janet is holding a red messenger bag, holding the strap tight to her body like she's protecting it and also looking behind her back—is someone coming? A band on the run.

I wanted to be in a band, and maybe be on the run. I wanted to be like Carrie, in a little denim skirt and black tights, a button down layered under a sweater and a smart jacket. The description sounds like casual business attire and yet when I look back at the cover, she exudes power. Corin's little textured jacket—is it fur? I bet it was Corin's favorite jacket, maybe it was vintage, it had lived a life before she even got it, it had power. Janet had the best hair, an exact bob. But Janet, as the drummer, is imbued with an allure of cool. Girl drummers man! They're still hard to find.

But you know, it's also not really about what they're wearing, it's about a vibe. This record has a melancholy vibe running underneath like a wild river. Looking at the cover made me miss something, made me wistful for something—I don't know what. I knew it wasn't my feelings to feel but I felt them. Dig Me Out, their previous record, the one that had made me fall in love with them (which also has an iconic cover), was fast and chaotic (good) and a party. One could say the songs in The Hot Rock were like the next morning, when the party's over and you're longing to have that same fun but you know that's not possible right now.

Maybe that's why this is one of the records on heaviest rotation for me right now. Singing along I feel newly identified when I yell "Are we captive only for a short time? Is there splendor?," singing along to "Get Up," or when I'm pogo-ing around my office singing "I wanna party like it's nineteen-ninety-ni-i-i-ine" in "Banned From the End of the World," which is coincidentally not not how I am feeling right now. BANNED FROM THE END OF THE WORLD!