We all have days like this. I was tired - no I was exhausted and I just couldn't shake the feeling. Until I went for a long walk after dinner! But I was still tired so I went to bed and had a great sleep and I'm recharged. I think there's been so much excitement in the last couple of days and well - my brain wouldn't shut down. Now I'm good!!

In light of that quiet day, here's some peaceful pictures from my walks and the backyard. BUT - there is quilting stuff at the end, so you can scroll there if you don't want to see the nature stuff.

When I walk, I like to take pictures of things. Here's a couple that I snapped recently on my walks.


This house was not alone. I've seen two more on my walks.


Hmm - is it the responsibility of the person in the house or the homeowner? So if the house is rented, whose job is it to cut the grass?? I think these are all rentals! We have one rented house on our street and it's a mess.

Most houses in our neighborhood are pretty much the same style. Two car garage in the front, a door. and then a window for the living room or the "front" room. But this house is different. I should get a picture in daylight so you can see it better. It has NO front window. There are two garage doors and a front door. That's it!!  Every time I see the house, it makes me think of houses in New Orleans.

I know - I've been to New Orleans. This is NOT a typical style house in New Orleans, but there are houses there that look like this. They were located in the French Quarter. Since that's the first place I saw the style, it reminds me of there. Even though this house has been located very close to me for over 15 years!!!

The forest in the back is beautiful these days. I don't walk there much and I miss it. There is a certain someone in my house who goes crazy because of the squirrels and well - it's just not a pleasant walk. However, I include the walk on my own solitary walk later in the day. The mosquitos are out these days so one does NOT linger there.

They were treating the forest for Gypsy Moths last week and some of the trees now have a burlap skirt on them. Not sure what that does - I didn't peak beneath the skirt - that would be rude!!!

But look at how beautiful it is in the forest. It's hard to believe that it's located smack in the middle of the city but it is. It's not large, but large enough.


We've had some pretty torrential downpours lately and it creates some neat designs in the gravel on the paths. It would be fun to watch this in the rain, however, not that much fun that I want to be out there!

I wonder why my pictures are all long and narrow? The darn phone is doing that!! And if I don't crop them, they look weird. I must correct that!

I also must have been really focused lately because the other day I went into the backyard and found these! Yellow irises. Now when did they start blooming?


Let's not forget the lilacs located near the gazebo. I love the smell of lilacs. It reminds me of my childhood home as we used to have some giant bushes near the house. By the way - if you want to see the pictures larger, you just have to click on them!

The lilies are growing like weeds in the pond. I love it when the leaves get to the surface, but the stem is not quite long enough for them to lie flat. They remain curled like a tube until they can pop out flat!


And I've got two blooms right now. It's beautiful to just sit and enjoy everything.


The fish are LOVING the lily pads. It gives them an obstacle course to swim through.


We have wildlife in the backyard. Lions! Oh - that's just Murphy!

So in the gazebo, which is my favorite spot, is shaded by the lilacs to one side and by this tree to the other side. Basically, just the front of the gazebo is open. It's such a perfect spot to relax.

So I spent some time there yesterday afternoon. Even though I had a nap, I couldn't shake the sluggishness.

I saw the sun disappear and storm clouds come in. Then I heard the thunder. I wasn't moving until I had to. Then it started to rain. I knew it was going to start to pour rain so I scooted in the house and it came down in buckets.

I'm happy to report that ALL quilting homework is caught up. But there will be more due later this month so I started cutting for the next project. It's a never-ending process, but I enjoy it so I'm not worried. One thing that makes a HUGE difference is that all the project boxes get stored back in the laundry basket. There is NO danger of not finding the project or the fabrics or the pattern when I need them.


I was getting in desperate need of some fabrics. Stuff that had to be matched and I'm not doing that over the internet. So I took a drive to a place where I thought I might find what I was looking for.


I believe I mentioned this store a while back. It ONLY has fabrics and craft things. This happened after they purchased Designer Fabrics. I donned my required mask (first time shopping with a mask) and entered the store. It was very quiet in the store and not many staff in the store. But there was someone to cut and someone to check me out - that's all I needed.

I overheard one very CHATTY staff member talking about staffing and how she usually comes in only four hours a day, and she wasn't sure she was going to make it to 5 PM. It was 10 AM. She was older and had a face shield on as well as a crocheted mask that was hanging from one ear! The crocheted mask, which she was willing to write down the pattern to anyone who wanted it, had a filter in it. I swear she spent more time talking than she did working. She might as well have gone home. She was going to put fabric on the shelves, but couldn't push them into the shelf, so she was going to leave them on the shelf and have the other girl come by and push them into the other bolts.


Now I know at the best of times, this store may not be neat, but it was MESSY!!!! Things just seemed to be everywhere! This is NOT a substitute for a well-run quilt store, but because I had quite a list of things to get, I figured this was my best bet.

Hey - look what I found. If anyone is looking for the panels to make my Uptown quilt, I used TWO of these panels.


Oh shoot - it's been pulled from the Northcott website (the quilt is old after all). I'll find the picture and post, so if anyone wants the pattern, I can get it to you.

I wanted to look at the silks. I almost bought something, but I didn't. They have racks and racks of decorator fabric. If you're looking for something, this would be the place to go!!!!  God - I need to crop these pictures. That shape is driving me nuts!!!

Just for comparison, here's one that's been cropped. Much better. I've probably changed some settings on the camera. I'll check it out or start cropping more! I'm happy to report that I had a list of SIX things to buy and that's all I bought. I had to go around the cotton section twice before I found everything. Not perfect, but it'll do. I'll be sharing that with you as I get the projects done. I've already cut into one piece. 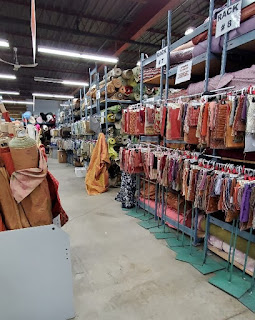 I'm keeping up to date with trimming the little triangles from the enders/leaders. These are from the homework for Christmas Fig. I have four more to sew and trim. The rest are trimmed and in the little bag to do something with later.

Here's the position on the map. There used to be an AMAZING quilt store in Warman. I love making that detour! There is a new one that opened in 2018, but I've never had the chance to get there. Road trip!!!


Ooops - one more photo from the backyard! I can't help myself - I love that place so much. While I like our house, I LOVE that backyard. I do need to get out and pull a few weeds, and this morning would be a perfect time since it's not hot.


On that note, I'm out of here. I've got a lot of stuff to get done - as usual! No immediate deadlines, but there are projects that have to be done this month, and I'd better get started before it becomes URGENT. Make a list and follow that.