Welcome to a 99¢ sale today through Thursday, September 9, on TABITHA'S JOURNEY, part of the Stone Mountain Texas series.

One of my favorite things is writing about characters who have been misunderstood throughout their lives. Tabitha Masterson’s father and brother have never acknowledged her worth as an individual, much less as a business woman. Now that her father has passed and her brother is in charge of everything—including her—she is faced with painful decisions.

Tobias “Bear” Baldwin is a handsome giant most people see only as brawn. He’s popular, but almost no one except his mom gives him credit for intellect. 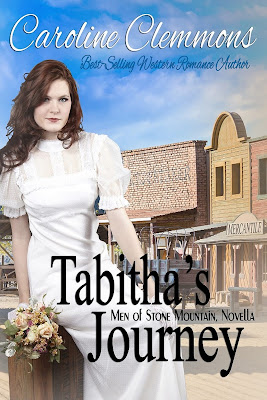 Would you become a mail-order bride?

Tabitha Masterson is certain whatever awaits her in Radford Springs, Texas will be better than what her brother and that awful William have in mind in Boston. After her father’s death, her brother has become a tyrant. She escapes to begin her new life in Texas, but trouble can’t be far behind. She believes if she’s married when trouble arrives, she’ll be safe. But her fiancé is reluctant to accept her as a substitute for the mail-order bride he’d courted.

Bear Baldwin is crushed when he receives a wire notifying him that the woman with whom he has corresponded for almost a year has passed him off to her friend. Do the two women believe he’s like an old shirt to be handed down? His mother urges him to give the substitute fiancée a chance, but his pride is stung and he hasn’t decided.

The Amazon buy link is https://www.amazon.com/Tabithas-Journey-Stone-Mountain-Novella-ebook/dp/B00D0C3MNC/

Here's an excerpt when Tabitha visits her friend Priscilla Witt:

Tabitha sat in the Witt family’s parlor and wiped tears from her face. “I’ve never been so miserable. Prissy, what am I going to do?”

“Are you certain he’d send you to an asylum if you resist?”

“Yes, but I don’t know which would be worse—being married to William or being locked away. The man gives me shivers in the worst way.”

“Me, too.” Priscilla paused and smoothed the folds of her yellow and black plaid taffeta skirt. “I-I’ve had another letter from Tobias.”

Her attention captured and anger deflected, Tabitha leaned toward her friend intent on hearing the missive’s contents. “Did her send for you?”

“Yes.” Suddenly, Priscilla’s face puckered as if she, too, might cry. “Oh, I don’t know what to do.”

“Prissy?” She leaned back to stare at her friend. “What do you mean? I thought you’d accepted his proposal.”

Tabitha was half in love with Tobias Baldwin herself. Already she knew they shared many interests. Priscilla had shared each of his letters, and Tabitha had assisted Priscilla in answering them. Assisted so much, the writing became Tabitha’s heartfelt missives to him.

“I was all set to leave, just as I said. But…oh, Tabbie, Virgil Allsup has finally spoken to Papa for me. If only Virgil had come forward sooner I never would have answered that mail order bride agency’s advertisement.” She sniffed and dabbed at her eyes with a handkerchief. “You know I’ve yearned for Virgil ever so long. By now I thought he didn’t want me.”

“What are you going to do?” Tabitha knew what she’d do. In her way of thinking, a man who dragged his feet as Virgil had all these years couldn’t begin to measure up to Tobias as a husband.

“That’s just it. I-I accepted Virgil’s proposal.” She sobbed into her handkerchief.

“Unethical? I know.” Priscilla waved her handkerchief. “I think it’s even illegal. Breach of contract or something.” Priscilla met Tabitha’s gaze. “But don’t you see? This could be a solution for your problem.”

Tabitha sighed and shook her head. “I don’t think mine has a solution.”

“Since you hate living with David and Bertha, and you always thought so much of Tobias, maybe you’d like to take my place.” She chewed at her lip as she glanced at Tabitha.

“Me? Go to Texas and marry Tobias?” Incredulous as the idea sounded, already Tabitha’s mind considered the option.