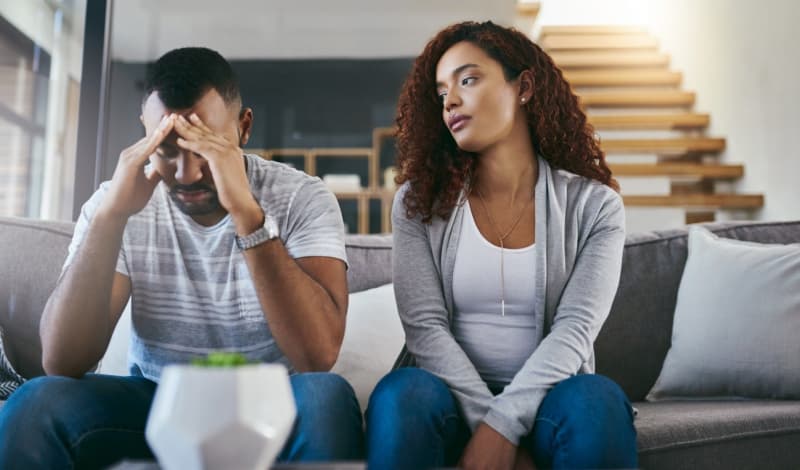 A common complaint among married men is feeling like their wives are always complaining about something—that they’re never happy for long and that nothing he does ever seems to be good enough for her.

I remember feeling that way for a few years before spending the final 18 months of my marriage sleeping in the guest room until she finally left for good.

I’m a pretty nice guy and most people seem to like me, and because of that, I always believed and acted as if she was the one with the problem.

I know how frustrating it feels to exchange your bachelorhood for a lifelong commitment to love someone else, only to be told over and over again that you’re doing it wrong.

I know how much it hurts to want your spouse to want you back when they clearly don’t.

I know what it feels like to want to die when they move out and choose some asshole stranger over you after a dozen years together.

Those are honest and real feelings I experienced in the months between her driving away permanently with our preschool-aged son in the backseat, and a court magistrate nullifying our marriage.

Because I hadn’t yet learned the critical life lesson that we can’t and shouldn’t always trust ourselves, I was confident that my interpretation of my marriage and wife’s choice was accurate. That, for whatever my marital shortcomings and mistakes might have been, in the final analysis she was MORE wrong for quitting on our family.

After all, I was happy being married to her. If she would have just stopped finding stuff to get pissed about, it would have been awesome.

But she was hard to please. She was ungrateful. She was the one with the problem.

It’s Not Your Fault, Guys—No One Taught Us Differently

The notion that “girls are crazy” or that women are “stuck-up bitches” or “hard to understand” or “always finding something new to complain about,” isn’t something me and my friends invented. We heard men and older boys and TV telling us these things.

Collectively, men are FAR from innocent victims in all this. But I have no doubt that MOST guys grew up believing this narrative—because situations with crying girlfriends, angry mothers, and stories from their guy friends about their experiences with girls/women seemed to reinforce these beliefs.

That girls/women are too emotional.

That they’re crazy and irrational.

Thought exercise: If you honestly believe a person you’re talking to is capable of temporary moments of insanity where they become hyper-emotional and their judgment becomes clouded to the point where they’re “wrong” or “misjudging” a situation, how do you handle a disagreement with them?

Most guys are set up from childhood to not only believe (as most everyone does) that our first-person experiences and emotional interpretations of them are a reliable guide for determining right and wrong, but many of us also believe that our girlfriends and wives are WRONG when they react emotionally to something we say or do, and during arguments.

I thought my wife frequently overreacted to something she was upset about.

I left a dirty dish by the sink, and she decided she wanted to argue about it. I thought it was irrational to elevate a dirty dish to a marriage problem.

And because I believed my wife to be irrational, I believed she was wrong.

Because I believed she was wrong, I was never really motivated to change.

She’s the one with the problem.

A lot of people read my most-popular articles—either “She Divorced Me Because I Left Dishes by the Sink” or “An Open Letter to Shitty Husbands”—and sometimes afterward men will tell me what a stupid dumbass moron I am because of whatever I wrote.

They think I’m advocating for men to start selling out and doing whatever they can to placate their wives so she won’t want to leave. To “make her happy.” They think I wrote that all men are dicks who deserve to be left and all women are victims who never make mistakes in their marriages.

They confuse my message of “Stop hurting her” with “Do whatever the little missus wants and worship her no matter what,” and it’s sad because they and their families will inevitably suffer for it, but it makes sense to me because maybe I would have had a similar reaction back when I was still blaming everything on my wife.

Let the record show that this isn’t intended to be gender-specific. This dysfunctional conversation/argument dynamic can just as easily exist in a role-reversal scenario in relationships that look differently than mine did. But this is generally the kind of relationship I see and hear about most, and the kind I lived through.

The one where husbands and wives get caught in a Man vs. Woman vortex, and slowly hurt one another repeatedly for many years until their marriage fails.

Not from any one moment. In isolation, none of these past arguments seemed like a big deal as they were happening. Certainly not marriage-enders.

None of these moments were scary enough to trip the emergency alarms. Marriages have fights! You just get over it and move on! No big deal!

Until one day the pile of No-Big-Deal arguments gets so big that the floor collapses beneath you, and everything falls apart.

Most marriages don’t end because of something big and dramatic like a gunshot or bomb explosion.

Most marriages end from bleeding out after being paper cut to death. One, even 10, paper cuts aren’t that scary. But after tens of thousands, maybe you bleed so much that you die.

The #1 Thing That Ends Relationships

I believe, when you strip away all of the bullshit and psychobabble, that one idea sums up why more than half of all relationships fail:

Men frequently demonstrate an inability or unwillingness to recognize the pain they cause their wives or girlfriends and then fail to intentionally adjust the behavior to stop hurting them.

Empathy can often be hard for people to exhibit when we don’t relate to nor understand what someone else is going through.

His wife is telling him that something he is doing HURTS her—not unlike him punching her in the face or stabbing her with a knife.

Only the smallest percentage of men would ever actually punch or stab the woman he loves. The VAST majority of men take seriously their role as “protector,” regardless of whether his wife or girlfriend needs protecting.

“I would never hurt you,” men say to their wives or girlfriends.

He says it over and over again, and believes it with all of his heart. He’s being totally serious and genuine.

This situation his wife or girlfriend is describing during this most recent silly argument is too ridiculous to be taken seriously.

She’s overreacting again. Making a federal case out of something that doesn’t matter. She’s saying this HURTS her? No way.

I don’t care when she leaves a piece of laundry on the bedroom floor, so how could it HURT her when I do it?

I don’t care whether she gives me a gift for our wedding anniversary, so how could it HURT her when I forget to do it?

I don’t care when she forgets something at the grocery store, so how could it HURT her when I do it?

I don’t care about Valentine’s Day and think it’s stupid that people make a big deal out of it, so how could it HURT her when I don’t agree to treat the day the same way she wants to?

I felt like my wife was getting lightly hit with a pillow but responding emotionally as if I was swinging a bat at her.

And I thought that was CRAZY.

I thought she was wrong.

I thought she was hard to please.

I thought she was acting like an ungrateful bitch for acting like nothing I did was good enough for her.

My wife thought I was either hurting her on purpose, or cared so little about her that I was refusing to change any of my behaviors that might help her.

When you tell someone that something within their control is HURTING you, and they not only demonstrate an unwillingness to stop, but also are telling you that you’re too dumb, too crazy, too WRONG to know what’s real and not real—what do you do?

Put on a happy face and pretend everything is okay?

Decide to carry on as an intimate partner to the person who hurts you more than anyone else, and seems unwilling to stop?

Bad news, guys: You CAN’T make your wife or girlfriend happy no matter how hard you try. Not because they’re hard to please, but because all people must make peace with themselves before they can ever feel content and comfortable in their own skin. Until then, we’re all just fumbling around in the dark breaking shit.

I’d like to see what happens when a sad and angry wife or girlfriend tells her husband or boyfriend about something that’s hurting her, and instead of telling her she’s dumb and crazy, he apologizes sincerely, and moves forward giving his best effort to not let that happen again.

When you reduce your wife or girlfriend to a stupid, nagging bitch while she’s privately bleeding from hundreds of papercuts you’ve already forgotten about and never apologized for, maybe it makes sense for her to try a dramatic, emotional outburst to get your attention.

When you dismiss her plea for help repeatedly, maybe it makes sense for her to remove herself from the relationship in order to preserve her health and wellbeing.

And just maybe, when you take responsibility for the pain you might have accidentally caused, respect your partner enough to listen and believe her when she tells you about it, and LOVE her enough to make sure the painful thing stops happening—just maybe that’s where marital peace and healing live.

Just maybe that’s how you get to ‘Til death do us part.

I wouldn’t know, because I never actually considered that I might be wrong about her, and that I was not only capable of hurting her, but that I actually was.

I wouldn’t know, because I never actually took any responsibility during our marriage for hurting my wife. I never apologized, then followed it up with a behavioral change that would allow her to trust me again.

If my wife repeatedly hurt me and every time I told her about it she blew me off and told me I could expect her to keep doing so, would I really agree to stay in the marriage?

Is it possible that the same situation can hurt one person, and not another?

If I was hurting my wife and she couldn’t trust me or feel safe with me anymore because I told her a hundred times that she was crazy and mistaken instead of believing her, wasn’t she SMART and WISE to reluctantly end our marriage?

It took many years, but the truth eventually hit me hard.

I’m not divorced because my wife was hard to please or that she felt I was never good enough for her. I’m divorced because when my wife told me something was wrong, I treated her like a second-class mental patient and all but promised to never change.

Sometimes I wonder what might have happened had I not.

Instead of wondering, maybe you can actually find out.

Isn’t she worth it? Aren’t you?

This post was previously published on Must Be This Tall To Ride and is republished here with permission from the author.
—

If you believe in the work we are doing here at The Good Men Project and want to join our calls on a regular basis, please join us as a Premium Member, today.

Talk to you soon.