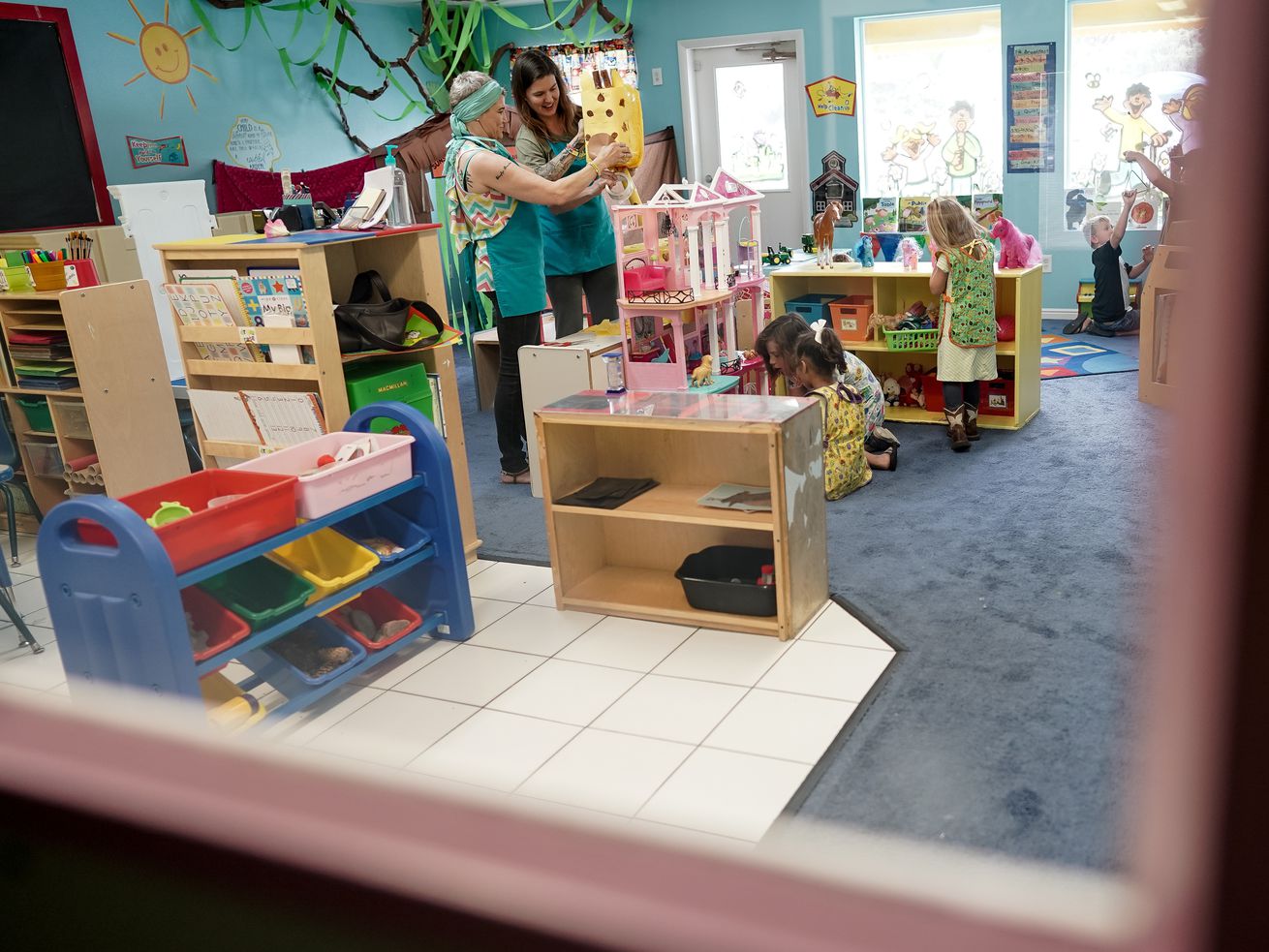 Preschool teachers DiVina Warren and Eliza Graves work with children at Sunshine Academy Preschool & Daycare in Alpine on Thursday, May 14, 2020. Sunshine Academy is one of several child care centers that have been approved to reopen, with a number of strict new operating guidelines, to serve the children of essential workers during the COVID-19 pandemic. | Spenser Heaps, Deseret News

ALPINE — More Utahns will likely be returning to work next week, but they will still face another challenge: child care.

“Presently, child care facilities that are operating are not at full capacity. However, if all children come back to child care, we may not have enough providers to respond to the demand,” said Simon Bolivar, program administrator for the Utah Child Care Licensing Program.

Nearly 400 child care facilities in Utah remain closed, according to a report from the Utah Department of Health’s Child Care Licensing Program. This includes both licensed facilities and in-home services. Bolivar said many of these facilities will be slowly opening, but that there are some that won’t recover and will remain closed.

One facility that has been operating through much of the pandemic as an emergency day care for children of first responders is the Sunshine Academy in Alpine. Sunshine Academy also has facilities in Magna and West Valley City that are open to the general public.

Carree Read says the child care center she directs is licensed to care for 41 children under normal operations, but lately, she’s lucky if she sees eight kids a day. The center’s emergency status further limits her enrollment cap to 24 children.

She hoped the status would increase the number of kids in her care, but she says it hasn’t made up for the large loss in normal enrollment before the pandemic.

“It’s definitely affected us as far as enrollment goes,” she said. “There’s been days when we only have one kid.”

She said the nice thing about being an emergency center is that the state government is footing the bill, so it’s kept money flowing. But she isn’t allowed to enroll the children of workers in other essential businesses.

“(The state) only allows people working as first responders and in health care to use emergency day cares, but I’d like to see other essential workers have access to us,” Read said.

As the state moved from high- to moderate- and now low-risk levels, the Sunshine Academy hasn’t seen much of an increase in demand for child care services yet, Read said. But she is hopeful that it will change over the summer.

“It’s going to be a challenge to recover,” she said.

In the meantime, her staff has been working hard to prepare the facility to return to normal operations. Read said the center installed an additional wall to create a third classroom to adhere to current state guidelines to maintain distance between groups.

They’ve also been painting, deep cleaning and keeping up with required training to try to keep her employees working, Read said.

According to recent guidelines issued by the Utah Department of Health, child care facilities must limit groups to 20 people, which includes staff, children and household members.

Centers that are approved for more than 20 children may admit more people into the facility only if they are able to keep groups of 20 separated by walls that are 6 feet or higher.

In addition to the preexisting rules for child care licenses, the centers must take additional precautions such as taking the temperatures of everyone admitted into the facility, making sure everyone is washing their hands frequently, and restricting off-site activities like field trips.

Read says they are following the health department’s guidelines by keeping visitors from entering the center and that parents must wait in the foyer. She makes sure the kids wash their hands every hour and disinfects surfaces daily and after the center closes.

Child care centers are also encouraged to use guidelines released by the Centers for Disease Control and Prevention to curb the spread of the virus.

Ty Johnson, administrator at Learning Blocks Daycare in American Fork, says the business lost almost all of its enrolled children when the pandemic first hit and the state closed down the economy.

Learning Blocks went from caring for 15 kids a day down to two or three for the first few weeks and had to lay off several staff members, Johnson said. However, he’s seen an increased interest in Learning Blocks from parents who are returning to work.

“Business is starting to pick up again, and we’ve had new interests from parents,” Johnson said. He hopes to see old clients return but said there are many who are still working from home.

Overall, he said he feels really blessed because the center wasn’t hit as hard as others.

Both Read and Johnson’s businesses were approved for the Paycheck Protection Program, which helped them continue to pay staff who had their hours severely cut.

Utah has struggled to meet the state’s child care demands even before the pandemic caused sweeping closures, officials noted.

According to Tracy Gruber, director of the Utah Office of Child Care, the agency and Department of Workforce Services are working hard to help facilities reopen and be able to meet demands.

“Child care is a critical piece of Utah’s infrastructure, so if that part of the infrastructure isn’t working, then it will impact other areas of the economy,” Gruber said.

“I think the good news is that every day more and more providers are opening, which is expanding access for parents going back to work at this time,” she said.